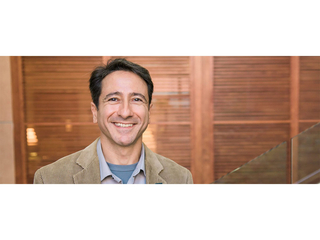 UMBC’s Carlos Romero-Talamas is leading a group of researchers in designing and building a machine to produce nuclear fusion energy. The project is one of just 16 new initiatives selected for support through the U.S. Department of Energy’s Advanced Research Projects Agency-Energy program. The researchers will use the $4 million grant to develop and build a centrifugal mirror that can conduct electricity and will generate energy from fusion reactions.

The team’s goal is to use what is essentially a rotating magnetic mirror machine to produce energy from nuclear fusion, explains Romero-Talamas, associate professor of mechanical engineering. “This type of nuclear energy is considered the ‘holy grail’ of energy sources because of its inexpensive and abundant fuel supply,” he says. He adds that fusion energy does not emit greenhouse gases.

The research team includes researchers from both UMBC and the University of Maryland, College Park (UMD). The device they will design and build will fill a large laboratory at UMD’s Energy Research Facility.

Romero-Talamas explains that the power system will consist of hundreds of large, high-voltage capacitors and electromagnets. It will also include active controls to prevent the magnets from overheating. There will also be a separate space for machine controls, because researchers will not be in the equipment room while conducting experimental runs, as a safety precaution.

The preliminary design of the vessel and supports. Image courtesy of Romero-Talamas.

The research team will design the vacuum chamber and coils, which will be fabricated by experienced suppliers. The vacuum chamber will be approximately the length of two midsize cars. However, it will weigh a lot more than that, Romero-Talamas explains. The entire structure will be more than seven feet tall.

Romero-Talamas will collaborate with Adil Hassam, Tim Koeth, Brian Beaoduin, and Ian Abel, all UMD faculty serving as co-PIs. He and the team will also work with undergraduate and graduate students from both universities.

As the PI, Romero-Talamas will direct the research project, and will play a significant role in the engineering design and construction of the technology. UMD faculty and students will take the lead on equipment safety and certification.

Carlos Romero-Talamas presenting at an event. Photo by Marlayna Demond ’11 for UMBC.

“Our efforts are aimed at not only solving long-standing physics questions regarding the possibility of confining thermonuclear plasmas with centrifugal mirrors, but to help in the technology transfer to market and make fusion energy a commercial reality,” Romero-Talamas says.

Romero-Talamas says that he has been interested in fusion energy since he was a graduate student at Caltech. “Initially, I wanted to work in plasma rocket engines, but when I took a plasma physics class, fusion energy seemed very exciting, important, and urgent to me,” he recalls. “Since then, the study of plasma physics aimed toward helping fusion energy become a reality has been central to my research.”

In nuclear fusion, energy is released when two nuclei collide at high speeds. Romero-Talamas points out that the act of fusing nuclei is difficult to accomplish. Like magnets, when ions are brought close to one another they begin to repel, which makes the high-speed collision important to overcome the repulsion and make fusion energy a success, he says.

Fusion energy can be generated from water and lithium, and doesn’t require many additional resources. It requires a small amount of material compared to traditional energy extraction methods, like burning fossil fuels, says Romero-Talamas. When a fusion reactor launches particles at each other at a high speed, their collisions can generate temperatures that are nearly 10 times hotter than the center of the sun.

Romero-Talamas and his research team will also work with experts at Virginia Tech and the Princeton Plasma Physics Laboratory on simulations needed for this work. And students will be involved in every step of the research, from design and construction to presenting findings at conferences and in peer-reviewed journal articles.

This effort, which we call the Centrifugal Mirror Fusion Experiment, is an important step towards the realization of commercial fusion energy, Romero-Talamas explains. “A commercial reactor based on our concept would be relatively compact with respect to other fusion contenders, lowering the cost and time to market,” he says. “While there will be important materials and engineering questions that will need to be addressed before scaling up to a commercial reactor, we will address the most important physics questions that could put us in a path to a demo reactor in years, not decades. We are very excited to be working on a truly transformational technology that will enable a virtually inexhaustible energy source with very small impact to our planet.”