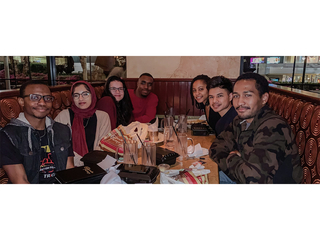 Danilo Symonette, Robin Bailey, and Hye-Jin Park are earning their UMBC degrees this month having researched in top labs and being invited to present their findings to colleagues across the country. They sound like phenomenal Ph.D. students, but they’re actually all undergraduates.

Symonette ‘20, computer science, has earned one of the most prestigious graduate fellowships in the U.S. after completing years of research in artificial intelligence. Bailey ‘20, biological sciences, conducted research at Harvard Medical School’s Joslin Diabetes Center. Hye-Jin Park ‘20, psychology, researched the experiences of Asian immigrants in the United States, including discrimination and resilience.

Their interests vary greatly, but each celebrates the impact that UMBC mentors have had on their college careers, including the chance to access incredible opportunities.

When Symonette transferred to UMBC from the College of Southern Maryland in La Plata, Maryland, he knew he wanted to study computer science and conduct research on artificial intelligence, which he sees as a “revolutionary” field. He quickly found a supportive community of friends and mentors at UMBC, and became a McNair Scholar.

UMBC’s McNair Scholars program is a Federal TRIO program that supports students from disadvantaged and underrepresented groups in preparing for graduate education. The program emphasizes intensive research experiences and mentoring. Symonette’s McNair mentors helped him define and achieve his goals and navigate challenges along the way. 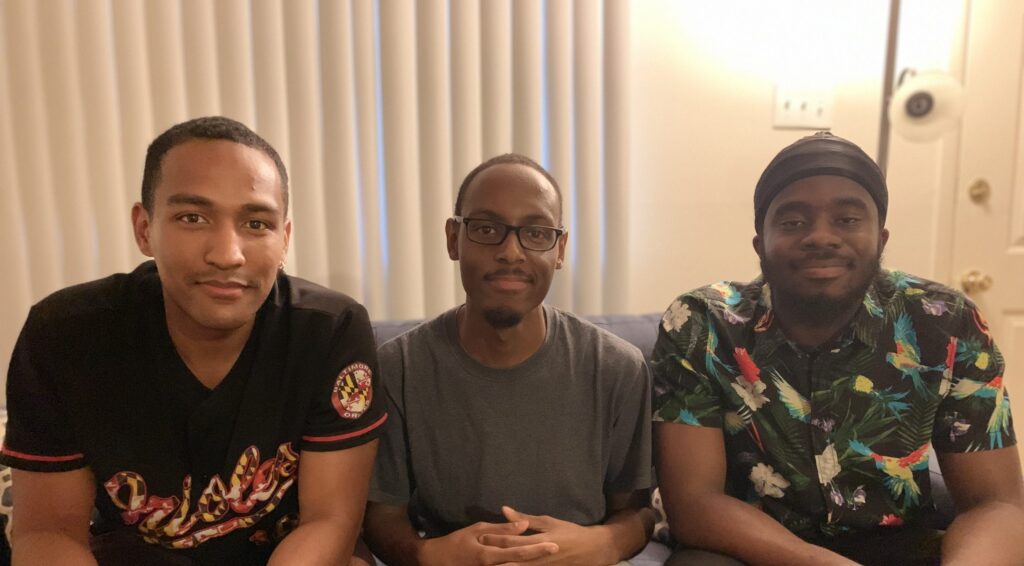 Danilo Symonette, left, and two of his friends at UMBC. Photo courtesy of Symonette.

“Being a McNair Scholar has entirely shaped my experience at UMBC and given me the community I needed to support my ambitions and pursue opportunities,” says Symonette. The program also introduced him to some of his favorite people at UMBC.

The value of mentorship

Don Engel, assistant vice president for research, is Symonette’s advisor on the award that supports his artificial intelligence work. He has been one of his most impactful mentors over the years. “Don Engel gave me the freedom to explore any and all of my ideas,” says Symonette. “He advised me on career decisions, wrote countless letters of recommendation, and always supported and believed in me no matter how lofty my goals seemed.”

Engel connected Symonette with the neuro-AI lab at the Johns Hopkins Applied Physics Lab, where Symonette is currently interning. Symonette accepted a full-time job offer to work at APL starting in June. This allowed him to explore his interests at the intersection of computer science, neuroscience, and psychology, and further refine his graduate school career goals.

“Danilo is one of the most talented and motivated students with whom I’ve had the pleasure to work. He has been a wonderful teammate to a broad range of student, faculty, and external research collaborators,” shares Engel. “I’m looking forward to following Danilo’s career, which I’m sure will be exciting and impactful.”

Symonette has also found mentors outside his discipline who have helped him develop a well-rounded perspective. They include Simon Stacey, director of the Honors College; former UMBC professor Marie DesJardins, now a dean at Simmons College; and Christy Ford Chapin, associate professor of history. Symonette says that Chapin helped him elevate his grad school essays and fellowship applications “to the highest level they could be.”

In addition to connecting Symonette with mentors, the McNair Scholars program also provided him with travel funding to visit several graduate schools across the country.

In 2018, he completed the Louis Stokes Alliances for Minority Participation (LSAMP) summer research program and focused on machine learning. The following year, he attended the NSF Graduate Research Fellowship Program at the Institute on Teaching and Mentoring, which was sponsored by the Southern Regional Education Board. “I saw a slew of Ph.D. students from underrepresented backgrounds come on stage and encourage me to pursue graduate education,” Symonette shares.

In 2019, he headed to MIT and studied models that detect confusion in features that rely on voice. His work was used as a foundation to develop sensors for a teacher education platform, to make it more effective.

“That experience equipped me with the inspiration, motivation, and knowledge to plan my next steps,” he says. Over the next 18 months, Symonette explains, “I was accepted to the top computer science Ph.D. programs in the world and won the NSF Graduate Research Fellowship.”

Today, he describes the LSAMP and McNair programs as “the vehicles through which I arrived at many of the pivotal moments in my journey.”

While focusing on his courses and research at UMBC, Symonette also enjoyed gaining early experience as an educator. He served as a teaching assistant for Computer Science 202, inspired by his own earlier challenges with the course.

“I struggled a lot in CS202 when I came from community college,” Symonette recalls. “Seeing all the errors and mistakes troubling students during office hours and being able to help them through those same situations…was extremely rewarding.”

Symonette also found ways to connect with younger students, to encourage them to pursue degrees and careers in computing. He served as the head of outreach for UMBC’s Computer Science Education Club, establishing strong partnerships with local high schools.

“I wanted to expand our outreach efforts so that more people could volunteer,” he says. He connected with Lori Hardesty, associate director for applied learning and community engagement at UMBC’s Shriver Center, to ensure the program would have the structure to be successful in the long term.

“We managed to get a consistent group of students volunteering at Landsdowne High School last semester and supporting the high school’s computer science and robotics club,” says Symonette. “It’s been great to connect with high school students, especially at a school like Landsdowne. There are students from similar backgrounds as me that I have a chance to inspire. It continues to motivate me to do research in AI and education.”

After working at APL for a year, Symonette will begin a Ph.D. program in computer science at Stanford University in fall 2021, with the goal of becoming a professor. “I’m looking forward to broadening my perspective, accessing opportunities, and developing as a researcher and educator—everything that comes with studying in a top-tier Ph.D. program,” he says. “I can’t wait to bring all of that back to my community.”

The importance of connections

Like Symonette, Bailey is a transfer student who found support within a scholars program. When she transferred to UMBC from Howard Community College, she was eager to find a welcoming group of friends and mentors. She found that community in the MARC U*STAR Scholars program.

The MARC program is designed to increase diversity and inclusion in the biomedical research field, with an emphasis on preparing undergraduate students for Ph.D. programs. “I was the only transfer student to enter my cohort, and feared I would feel like the new kid,” she shares. “Fortunately, the MARC community welcomed me with open arms and treated me as though I had always been at UMBC.” 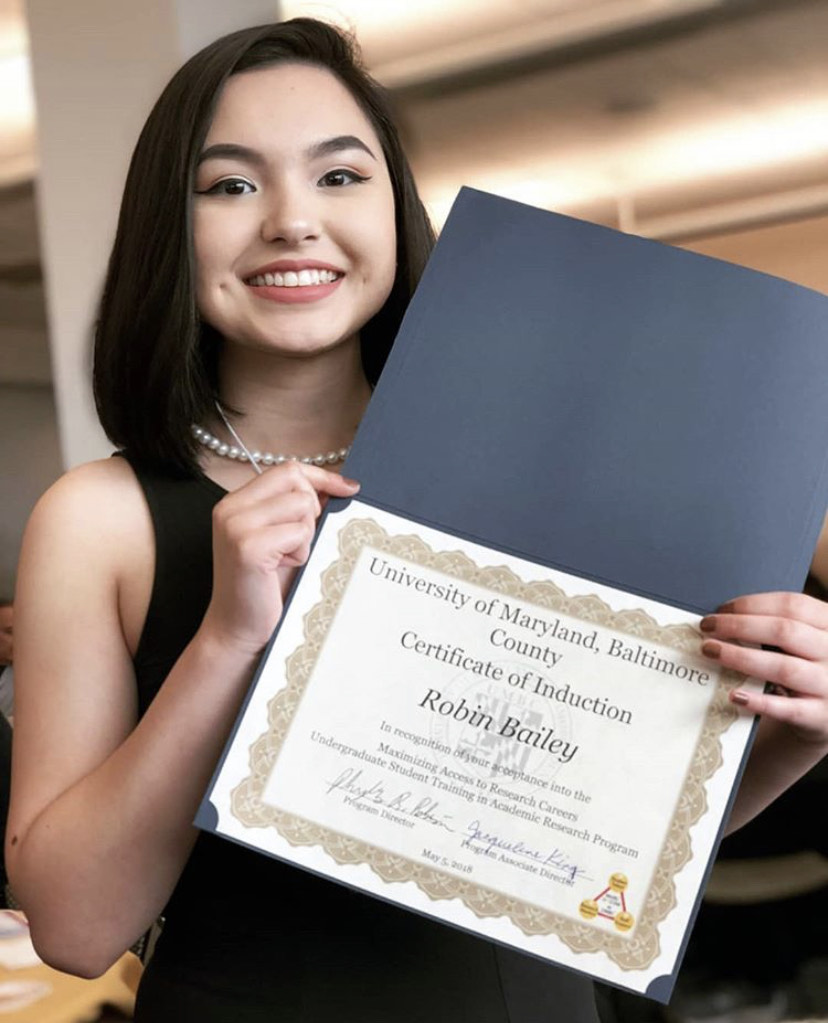 Robin Bailey with an award from UMBC. Photo courtesy of Bailey.

The MARC program connected Bailey with faculty across campus who supported her during her UMBC career. Phyllis Robinson, professor of biological sciences and director of the MARC program, is one of Bailey’s research mentors, who has provided her with a safe space to share her worries.

“Dr. Robinson has been an unwavering pillar of support in my journey at UMBC,” Bailey says. “She pushes me to be the best I can be in my education and in my personal life.”

Jacqueline King, assistant director of the MARC program, has also supported Bailey’s academic career. “She always encourages me to get out of my comfort zone,” Bailey explains.

Bailey has found a mentor Juan Valdez ‘12, M.S. ‘13, Ph.D. ‘20, biological sciences, as well. “Juan never fails to remind me that I am capable of doing anything I set my mind to,” she says. “He has unconditionally supported me even when I doubt myself.”

From UMBC to Harvard and UPenn

Bailey also valued the chance to connect MARC U*STAR Scholars at other institutions. This includes participating in the 2018 Annual Biomedical Research Conference for Minority Students in Indianapolis, Indiana. There, she received an award for her oral presentation on light-sensitive retinal proteins. 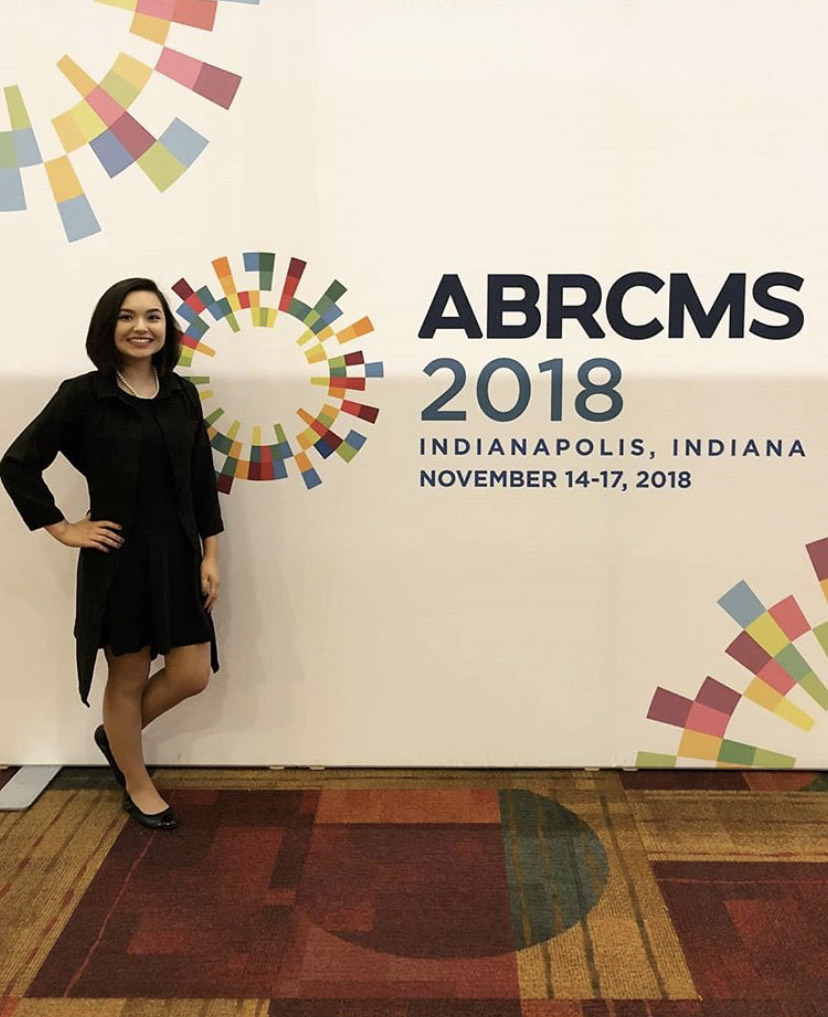 She was invited to participate in a summer internship at Harvard Medical School. There she conducted research at the Joslin Diabetes Center under Alexsandar Kostic, an assistant professor of microbiology. She and research technician Melissa Tran investigated the role of bacteria in pancreatic development. 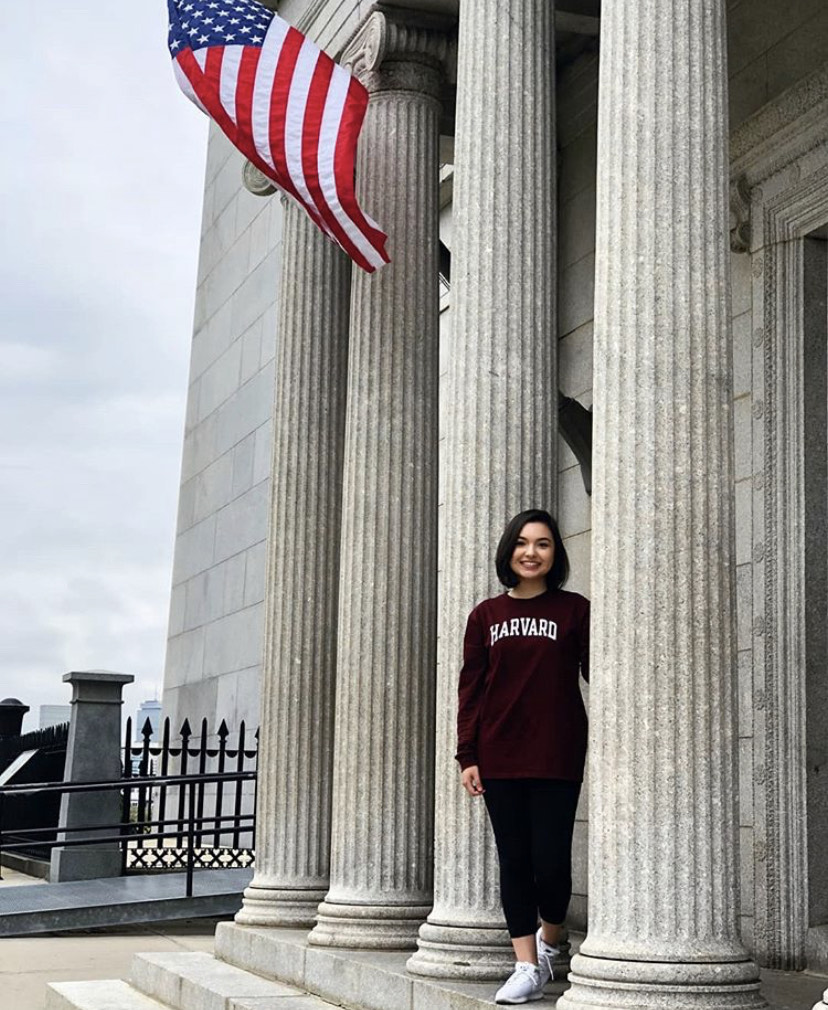 Through that experience, Bailey learned new research techniques that helped prepare her for a future career in science. “The friendships in the Kostic lab made Boston feel like a home away from home,” she says.

Bailey will graduate with departmental honors in recognition of her thesis, based on research she conducted in the Robinson lab. She will also receive the Faculty Award for Excellence in Biological Sciences. After graduation, Bailey will pursue her Ph.D. in cellular and molecular biology with an emphasis on gene therapy and vaccines at the University of Pennsylvania’s Perelman School of Medicine.

Finding your own path

Hye-Jin Park initially connected with UMBC through her sister, Hyun Jung Lee ‘16, visual arts, an alumna. She recalls coming to UMBC, noticing the diversity of the campus, and being excited to make friends, but also feeling incredibly shy. After a few months of accompanying her sister to meetings for groups on campus, she realized she was ready to branch out and explore her own interests.

One of these interests was psychology, which Park became fascinated with through a high school AP psychology course. She heard a graduate student talk about research being conducted in the lab of Charissa Cheah, professor of psychology, on the experiences of Asian immigrants. Her interest was piqued—she had to apply.

Born in Korea, Park and her family immigrated to the United States when she was about five years old. Her Korean heritage played a big role in her UMBC experience, including as a researcher, in an unexpected way. 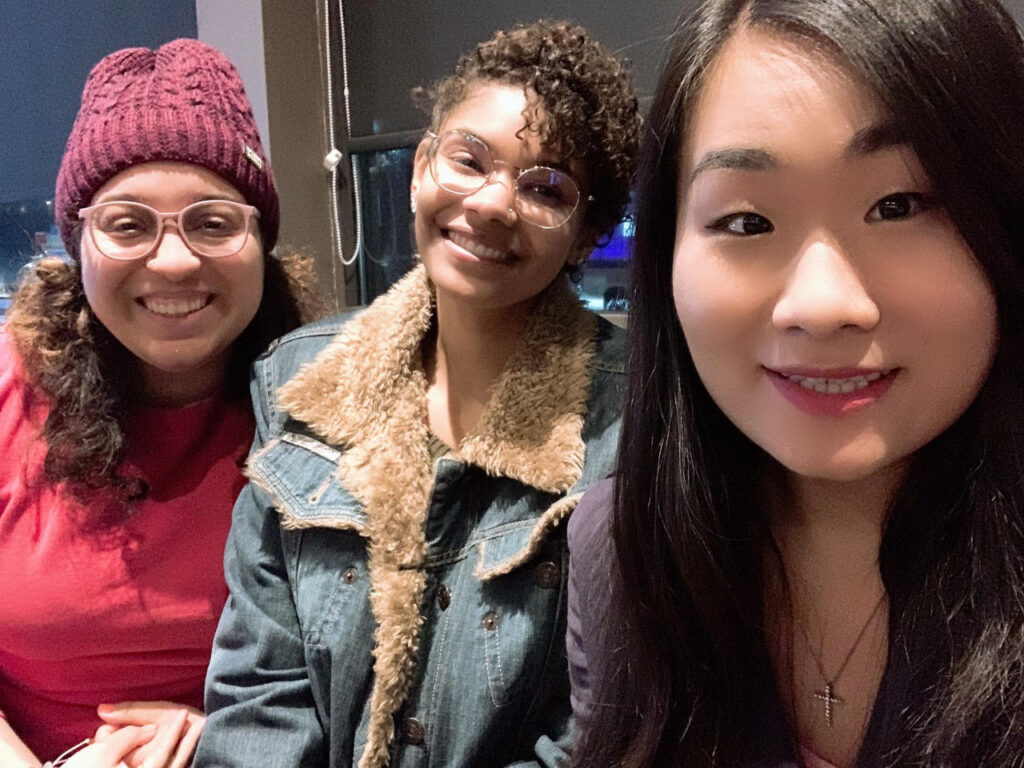 When she started working in Cheah’s lab, Park had not spoken the Korean language regularly in about 15 years. She was no longer fluent in Korean and couldn’t read or recognize the Korean alphabet, but she knew that speaking Korean would be a great asset in her research. She decided to teach herself Korean, relying on her mom and sisters to re-learn the basics.

As a freshman, Park supported the lab’s research through data entry, but her responsibilities quickly grew. Before long, she was administering behavioral tasks to children and interviewing parents for data collection.

By her junior year, Cheah had become one of Park’s closest mentors and a guide to meeting others in her field. “Dr. Cheah has been the biggest influence in my UMBC experience,” she says.

Park’s experience in the lab also helped her build confidence and a commitment to supporting younger students. She worked as a writing fellow in the psychology department, helping other students develop their skills writing and formatting academic papers. She joined CRU, a Christian student group, and became a member of Psi Chi, the international honors society for psychology. 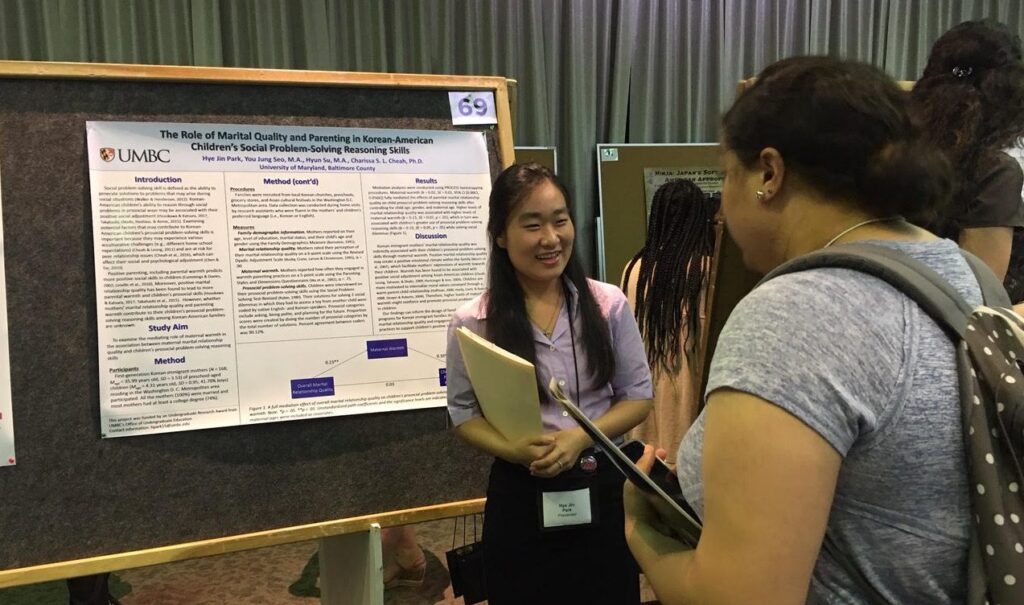 Off campus, Park completed an internship at Verbal Beginnings, an organization that provides applied behavioral analysis therapy and teaches various skills to children on the autism spectrum. This experience gave her an opportunity to plan lessons and learn from a professional team coordinator how to modify plans to meet the children’s needs.

Park was recently selected for the 2020 Society for Research on Adolescence Undergraduate Scholars Program. This honor would have funded her participation in the group’s annual conference in San Diego, set for March 2020 prior to the COVID-19 pandemic. “It was an honor to be accepted into the program. Even though the program got canceled due to the pandemic, I was able to connect with my mentors in the program,” she shares.

After graduation, Park will pursue her Ph.D. in human development at Michigan State University.

Banner image: Danilo Symonette, right, with his friends at a restaurant. Photo courtesy of Symonette.