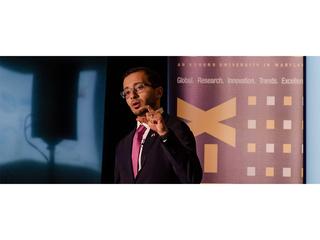 Al-Adhami developed a rapid bacterial-detection test that can assess, within an hour, if a patient has an infection. It can also help physicians determine which specific antibiotics should be administered to help fight the infection. Al-Adhami’s device, ASTEK, costs a fraction of the price of the current antibiotic susceptibility test. He hopes that it will reduce the duration of hospital stays and can reduce antibiotic resistance by avoiding unnecessary antibiotic use.

Al-Adhami earned first place in two qualifying rounds of the competition, on his path to claiming the national title. The first round was held at UMBC. The second round included 150 competitors from universities across the southern United States. The top two students from that round qualified for the national competition in Nashville.

In Nashville, Al-Adhami and nine other finalists presented their three-minute talks in front of a live audience that selected the ultimate winner. He explains that as he moved through the competition rounds he felt more at ease.

“I was very nervous doing the UMBC Three-Minute Thesis competition, but things got easier as the competition progressed,” Al-Adhami says. “Last weekend was more fun than anything else, maybe because I had my wife and a UMBC team with me this time.”

In addition to presenting in the Three-Minute Thesis competition, Al-Adhami has shared his work at UMBC’s GRIT-X talks, Idea Competition, and Cangialosi Business Innovation Competition. He was also on a team of three UMBC graduate students who won the BMEidea competition hosted by VentureWell (a national alliance of collegiate inventors and innovators) in August. He conducted his research in UMBC’s Center for Advanced Sensor Technology, and was advised by mechanical engineering faculty Marc Zupan, associate professor, and Chuck Eggleton, professor.