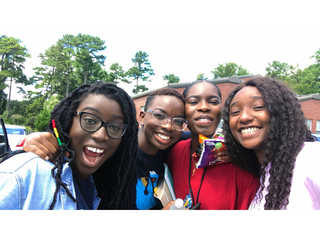 When Angel Badewole ’19, chemical engineering, began as a first-year student at UMBC, it was her first time living apart from her family in Lagos, Nigeria. Early on, she knew her success attending college in another country would depend on finding multiple places to plug in and connect. She would need to find or build a home away from home make it through her four years abroad.

Just looking at Badewole’s résumé tells a story of connection. She lists community-building and academic excellence as her two intentional goals. She built a self-made family through Residential Life—“It pulls together people that are so different”—and with the faith-based Bethel Campus Fellowship—“It’s a great place, it has the best connections.” Badewole also discovered a distant aunt who lives in Frederick, who would quickly become her “Maryland mom.” 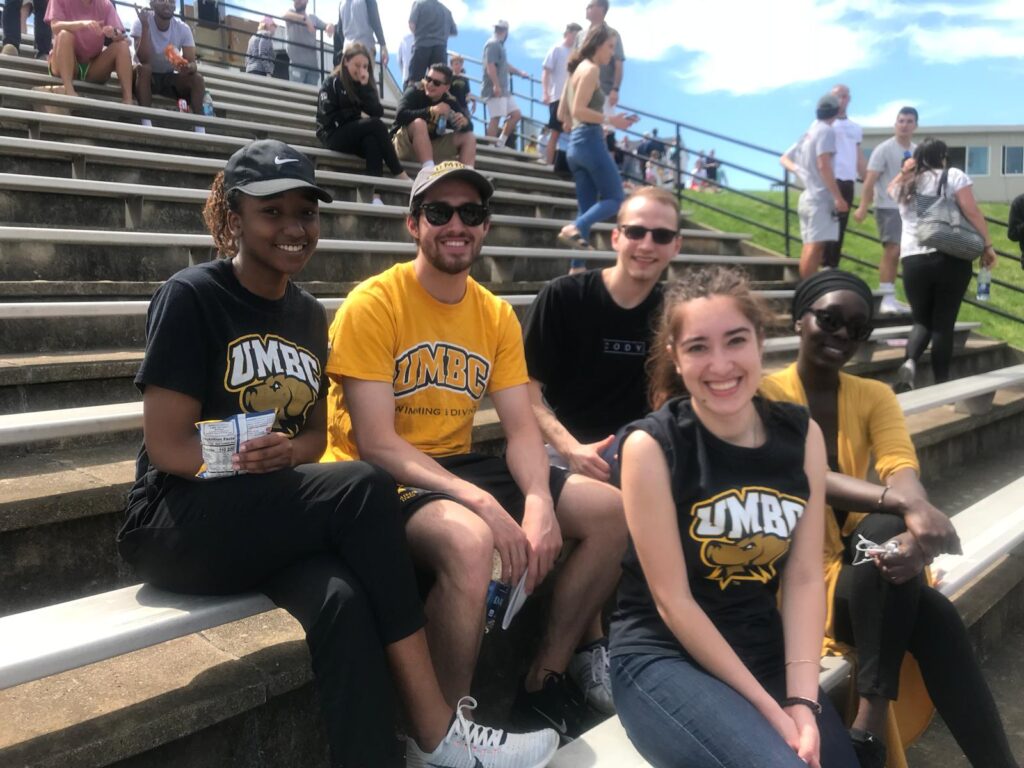 Badewole’s story resonates with many international students at UMBC. Maybe they heard about the institution through friends of the family, a lucky Google search, or UMBC’s reputation in their field of study. Then, often without having visited the United States, they arrived on campus, determined to make the most of their time here, both in the classroom and through connecting with people.

For doctoral students, that time is often much longer than four years.

Finding support in a time of transition

Amrita Anam, Ph.D. ’19, information systems, began her seven years at UMBC in a spring semester, meaning she moved from Bangladesh to Baltimore in January. “What is happening? Is this how I die?” laughs Anam, remembering the chilly weather in those first few weeks of adjustment.

She found her welcome in the information systems department, with professor and chair Aryya Gangopadhyay. “When I spoke to Dr. Gangopadhyay, I really liked how warm he was. There was no way I could do this without the support I got from my department.”

Sitting now on the patio in front of the campus Starbucks, Anam explains the research interests that drew her to UMBC. “I use social media data, Twitter particularly, and I use it for disaster response, but the interesting thing is that instead of using text analytics, I use signal processing.”

Anam and her teammates made the finals of the 2017 UMBC Hackathon. Photo courtesy of Amrita Anam.

With her background in electrical engineering, Anam wanted to attend a school on the East Coast to be near her sister in New York. She also knew she’d need funding to see her through a Ph.D. program. She found that through her assistantship at UMBC.

“If you come here directly to a very tough Ph.D. research scenario, it takes some time to even understand what’s happening,” says the cheerful data scientist. She appreciated that her department understood how to support her during her first months at UMBC. “School is not the same in my country, people are not the same, research is not the same, so I feel like those are the things that I needed some time to cope with,” says Anam. 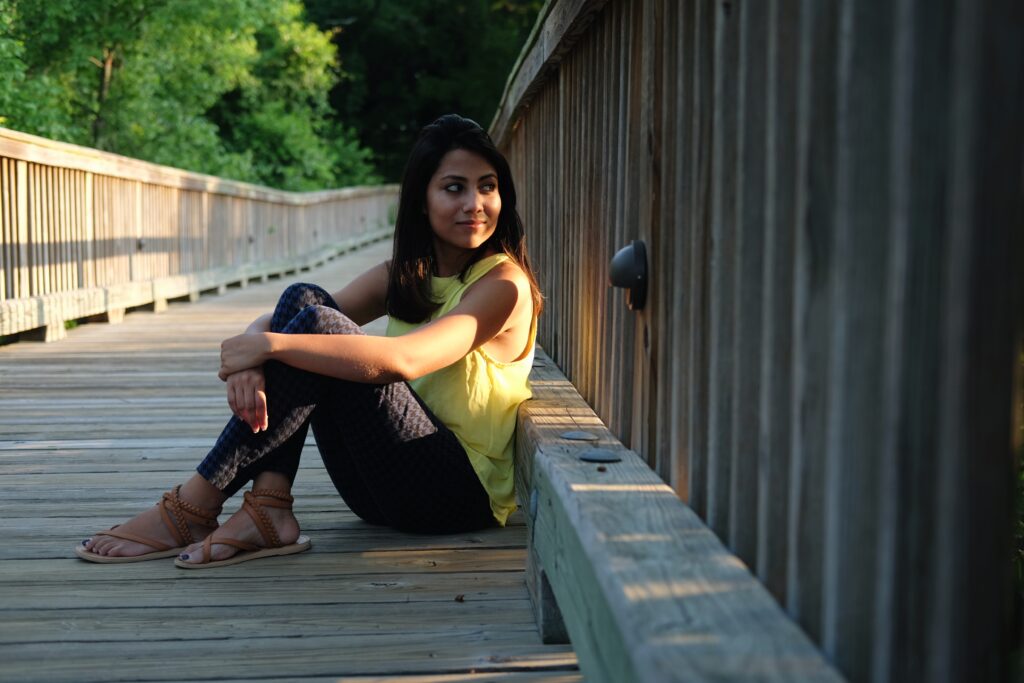 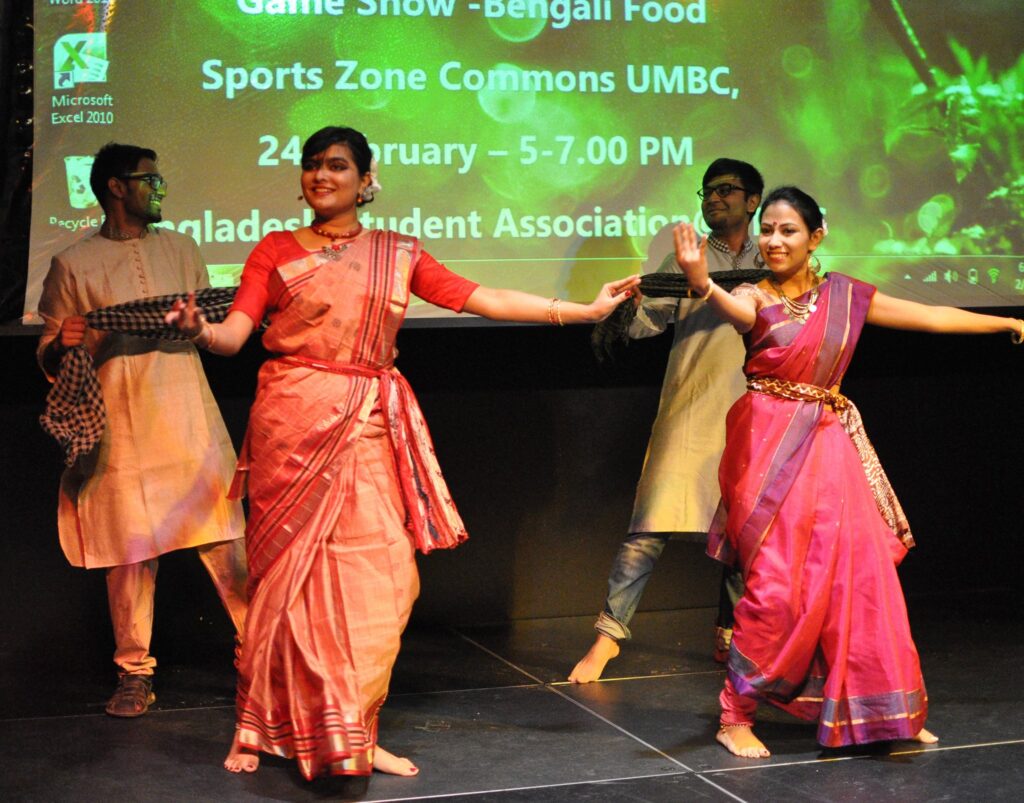 Anam’s time at UMBC has been fruitful academically and socially, but a personal tragedy recently shook her to her core. Both her parents had always encouraged her to continue pursuing her education, pushing her out of her comfort zone when she needed it. But, as she came close to finishing her Ph.D., her father—“a film director, very artsy, very nerdy”—passed away suddenly. 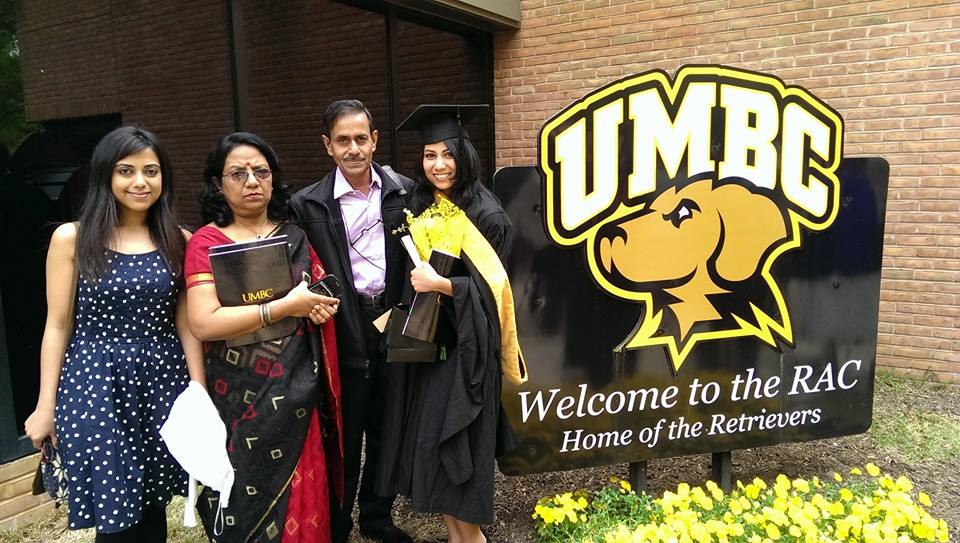 Amrita Anam’s father, mother, and sister joined her on campus to celebrate her M.S. graduation.

Anam says she felt completely supported by her department during this upheaval and, with their encouragement, was able to finish the degree she had been working so hard to earn for so many years. On a warm spring morning, the day after defending her dissertation, Anam shared, “They’ve seen me grow in all these years, so they were also very proud and happy.” She is now looking forward to her upcoming position at Amazon as a business intelligence engineer.

Keep knocking on doors. It works.

Tobi Odunsi, M.S.’19, cybersecurity, first found himself in Maryland in 2017 for the wedding of his godbrother. He wasn’t originally looking at graduate schools in the United States, but decided to visit the UMBC campus since he was in the area.

Interested in cybersecurity, Odunsi met with Toby Gouker, a faculty member in technical management, on a warm summer day. The Tobi-Toby meeting went well. “They didn’t have to do much convincing,” says Odunsi. After digging through the UMBC website, he already knew it would be a good fit. “As soon as I stepped into the school, I knew, ‘I like this.’” 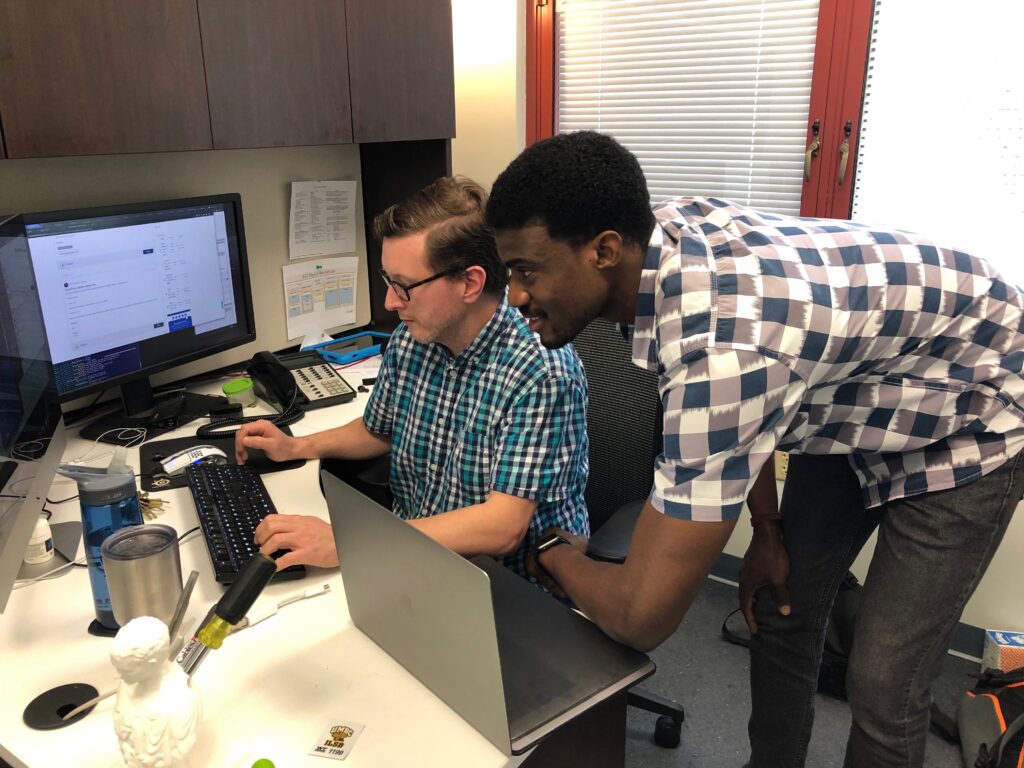 Odunsi, right, troubleshooting a network issue with Tim Boyle, a network engineer in the Division of Information Technology. Photo courtesy of Tobi Odunsi.

Like Badewole, Odunsi is from Lagos, Nigeria, and also found comfort with a faith community near campus, attending Christ Apostolic Church and the International Friends Club. Those connections helped ease his transition, but another key component to his comfort was staying with his godmother until he found a job and a community of friends on campus. “She was my home away from home,” he says. 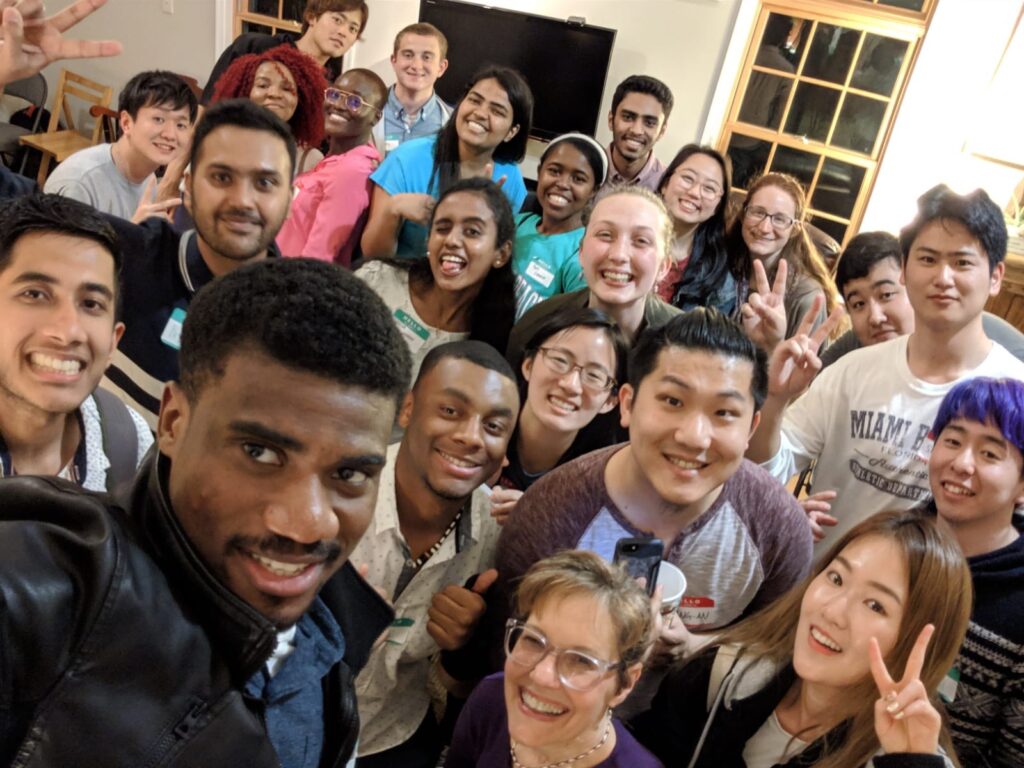 Odunsi and a group gathered to celebrate Easter with the International Friends Club. Photo courtesy of Tobi Odunsi.

Before coming to UMBC, Odunsi already had a strong interest in The Internet of Things—everyday devices that connect online with users and each other, like the smartphone app that pings your coffee maker to start brewing. Odunsi knew that for his graduate degree, he needed to find an unique niche in the broad field. He eventually decided on software defined networking, an approach to cloud computing. 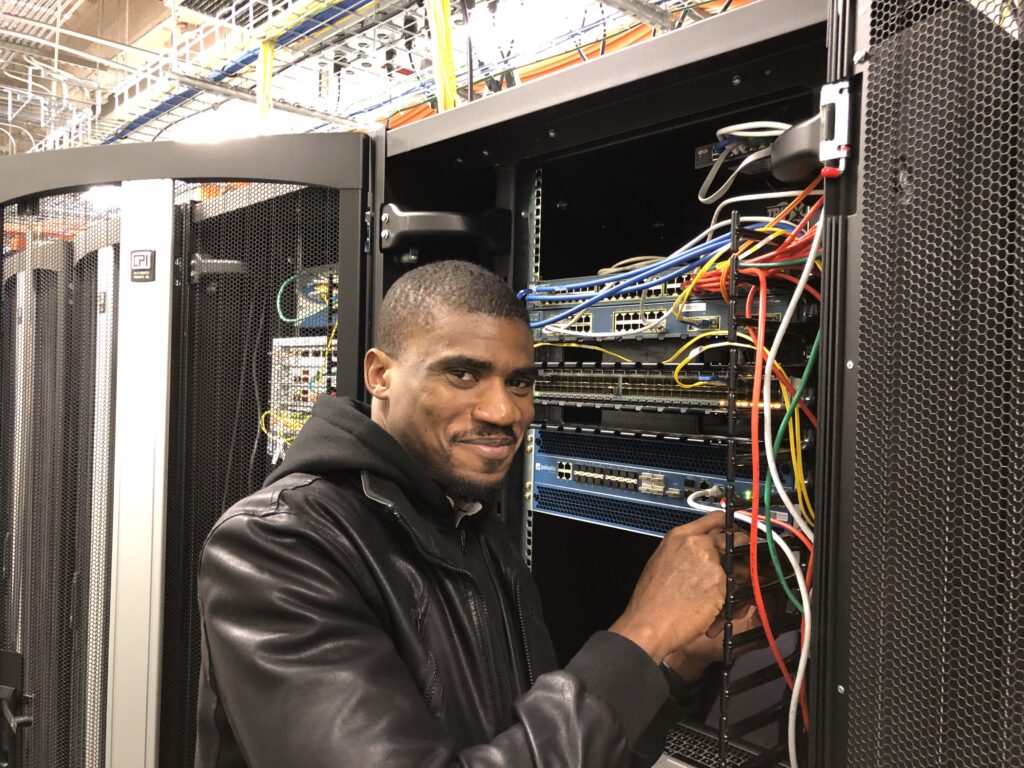 Tobi Odunsi setting up a next-generation firewall in one of the main data centers on campus. Photo courtesy of Tobi Odunsi.

Before long, Odunsi knocked on just the right door. When he reached Damian Doyle, assistant vice president of enterprise infrastructure in UMBC’s Division of Information Technology and told him about his research interests, Doyle responded, “Wow, we’ve been looking for someone to actually do something like that,” describes Odunsi. “So it’s like, the stars were aligned. And now UMBC is the first school in the University System of Maryland to implement that type of technology in their data center.” 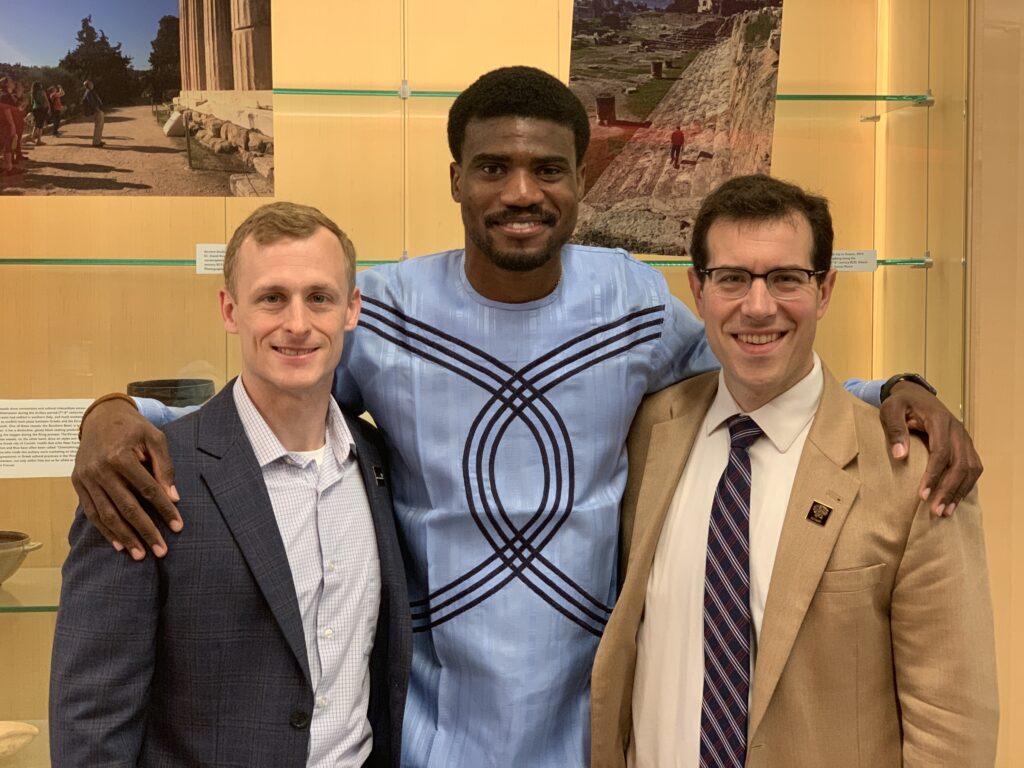 “Damian is a very great guy—his door is always open. There’s no time I’ve tried to schedule a meeting with him that he turned me down. He’s mentored me not just on work, but also given me guidance on how to proceed with my career, family, and likes of that sort,” says Odunsi, who will begin his position as a technology development program associate at Geico after graduation in May.

When Odunsi’s mother visited campus and met Dr. Hrabowski, he told her that her son had “a good head on his shoulders,” and she began to tear up. “She was so appreciative of how far I’ve come and the support they’ve given me.”

The office that makes it possible

Odunsi attributes the ease of his academic experience to the team in UMBC’s office of International Education Services (IES). “For international students…you need to always make sure you’re in the right standing,” says Odunsi. “I don’t know if it’s just me, but whenever I go there, it feels like home.”

Anam agrees wholeheartedly. “Studies are stressful,” she says, but thanks to IES, “I never have to stress about anything else.” She’s grateful to Michelle Massey, IES associate director, and other IES staff for their dedication to making sure international students can focus on their academic programs rather than spending all of their time worrying about visa paperwork.

Haixu Leng, Ph.D. ’19, physics, remembers that Massey was one of the first people to greet him on campus, and to welcome him to the United States. Whenever he thinks about UMBC, he thinks about the helpful and patient team at IES.

A Google search can change everything

Leng owes his time at UMBC to an internet search for quantum optics programs. He was then drawn to UMBC from China because “the UMBC physics department is a relatively small department, in which you can get the attention that you may not get in a very large department. I really liked it.”

As Leng settled into the physics department, he found a place in associate professor Matthew Pelton’s lab. There, using a home-built single-particle microscope, he studied the interaction between light and materials at the nanometer scale. 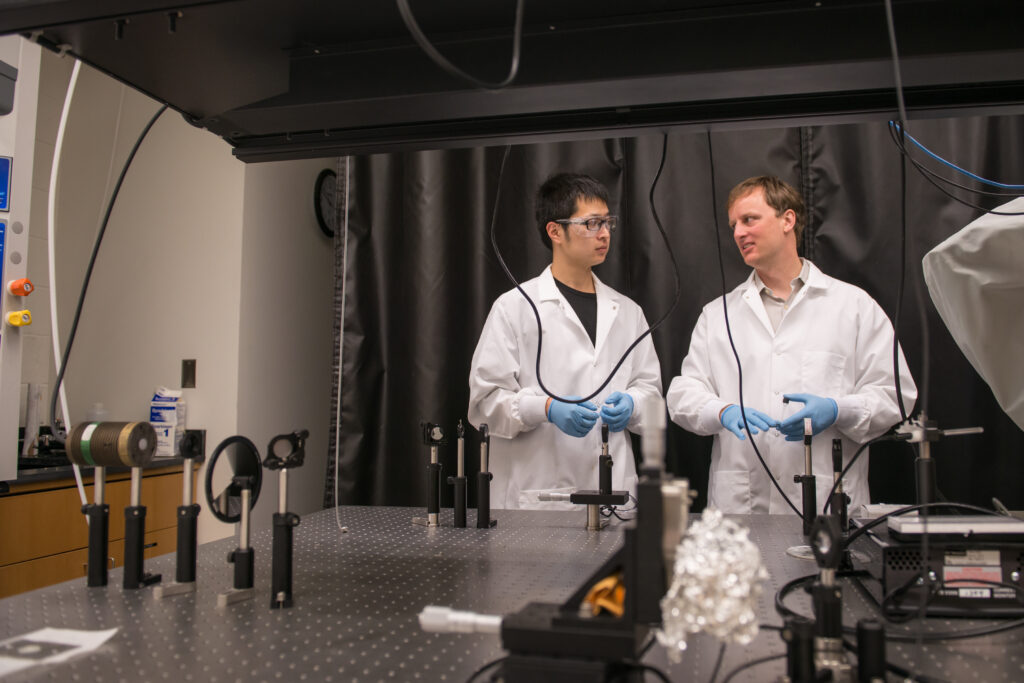 Haixu Leng works in the lab with his advisor Matthew Pelton. Photo by Marlayna Demond ’11 for UMBC.

Over his five years on campus, “the physics building became my favorite place,” says Leng. “It almost felt like home to me.” His other favorite place on campus is the library. There, he formed a friendship with Henan Zhao, a current Ph.D. student in computer science, over long study sessions. They have since married. 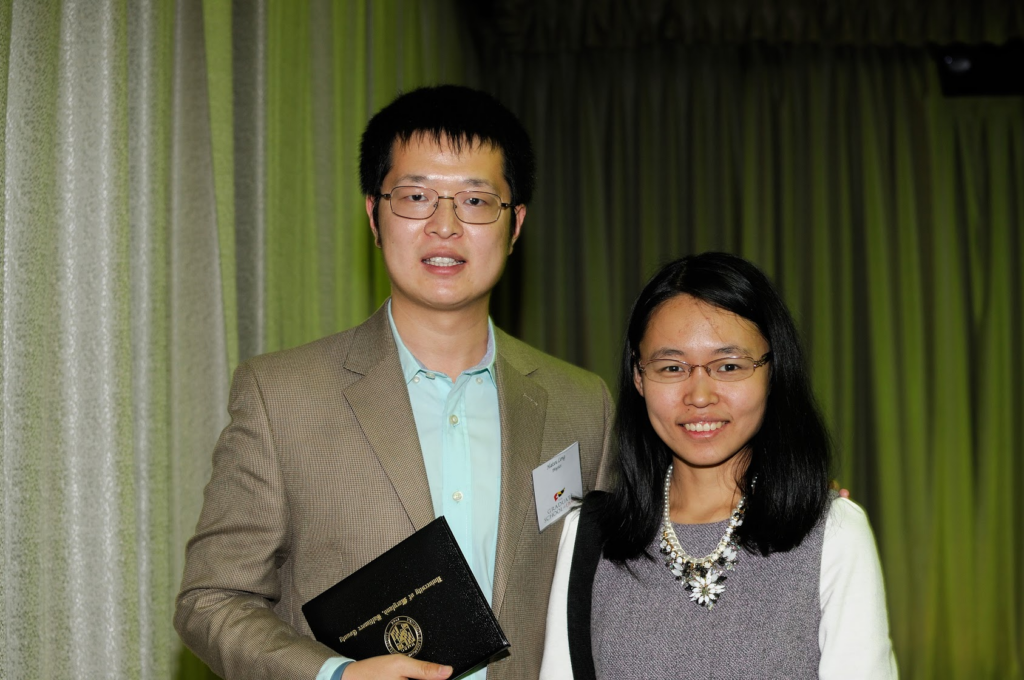 Opening UMBC to the world

International students who make their home at UMBC find many ways to continue celebrating their own cultures while taking part in the wealth of communities campus has to offer. It’s a two-way exchange that Badewole appreciates.

Odunsi sees the campus’s welcoming atmosphere as a trickle-down effect from the values of UMBC leadership. “There’s this community of international students at UMBC—it keeps growing—and Dr. Hrabowski has been monumental in that effort to bring international students here,” says Odunsi. “He’s opening the school to not just a few set of people, but to the world at large.”

This article was written by Randianne Leyshon ’09, assistant editor of UMBC Magazine.