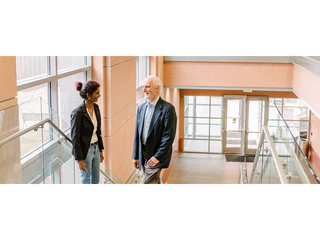 UMBC’s Tim Finin, professor of computer science and electrical engineering (CSEE), has been named a fellow of the Association for Computing Machinery (ACM), a distinctive honor granted to less than one percent of all ACM members. ACM fellows are selected based on their work to advance computing over the course of a career, in areas such as mobile networks, computer architecture, robotics, and security.

“It’s a great honor to be selected as an ACM fellow, since it is based on the recommendations of one’s peers and recognizes contributions to the field of computing,” says Finin. “I am especially honored since ACM fellows include so many pioneers of the field whose work and contributions I have studied and used over the past 40 years.”

“Dr. Finin has been a leader in our department ever since he came in as the chair in 1991,” says Anupam Joshi, professor and chair of CSEE. “He is one of our most accomplished researchers, and in addition to this fellowship, has been recognized both internally (as a Presidential Research Professor) and externally with numerous awards.”

Joshi continues, “Tim is a great teacher, and he has mentored a number of our mid-career and senior faculty, including me!”

Throughout his career, Finin has been involved with various aspects of ACM. As a graduate student at MIT, Finin became a member of ACM’s special interest group on artificial intelligence (SIGART), which is one of his primary areas of focus. In the years since then, he has collaborated with numerous many UMBC faculty, students, and alumni, in addition to colleagues in industry and at other institutions, to move this work forward.

In the 1990s, and with support from the Defense Advanced Research Projects Agency (DARPA), Finin worked with UMBC faculty to develop new software standards to support the then-new concept of intelligent systems. The software, called the Knowledge Query and Manipulation Language, was used to develop intelligent applications and as the basis for faculty research and many Ph.D. dissertations.

The ACM’s Conference for Information and Knowledge Management awarded Finin and his collaborators with the 2018 Test of Time Award for a paper about this research that has continued to have an important impact on the research community.

Finin and a group of collaborators also worked on projects related building the semantic web. “The idea was to enhance the new web technologies with a way to enclose structured data that machines could use into ordinary web pages,” he explained. He adds that this allowed computers to understand the information on the web page without having to understand natural language.

Starting in the 2000s, Finin and his collaborators focused much of their work on blogs and then social media, including Facebook and Twitter. They explored how to analyze the data collected on these sites, and also how to protect and improve security and privacy features.

“I’ve only been able to do this because of the environment at UMBC,” Finin says, reflecting on the encouragement he has received to pursue new collaborations and areas of research.

“Based on my experience,” he shares, “I hope to mentor more faculty in the middle of their careers,” to help them access opportunities through organizations like ACM.

Finin currently oversees and mentors UMBC’s student chapter of ACM, which includes both undergraduate and graduate students. The student organization sponsors weekly talks and other events for people in the UMBC community who are interested in computing and related topics.