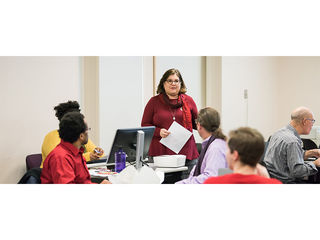 UMBC’s Office of the Vice President for Research recently presented awards to support the work of two dozen UMBC faculty examining topics from health disparities among people with diabetes to natural language processing.

Christine Mair, associate professor of sociology, anthropology, and health administration policy, and a faculty member in the gerontology Ph.D. program, received START funding to complete foundational research visits in global regions that are underrepresented in aging research, across Eastern Europe, Southern Europe, South America, and Asia. She is working to clarify research questions and strengthen relationships with potential research collaborators for a proposal to the National Institute of Aging (NIA). 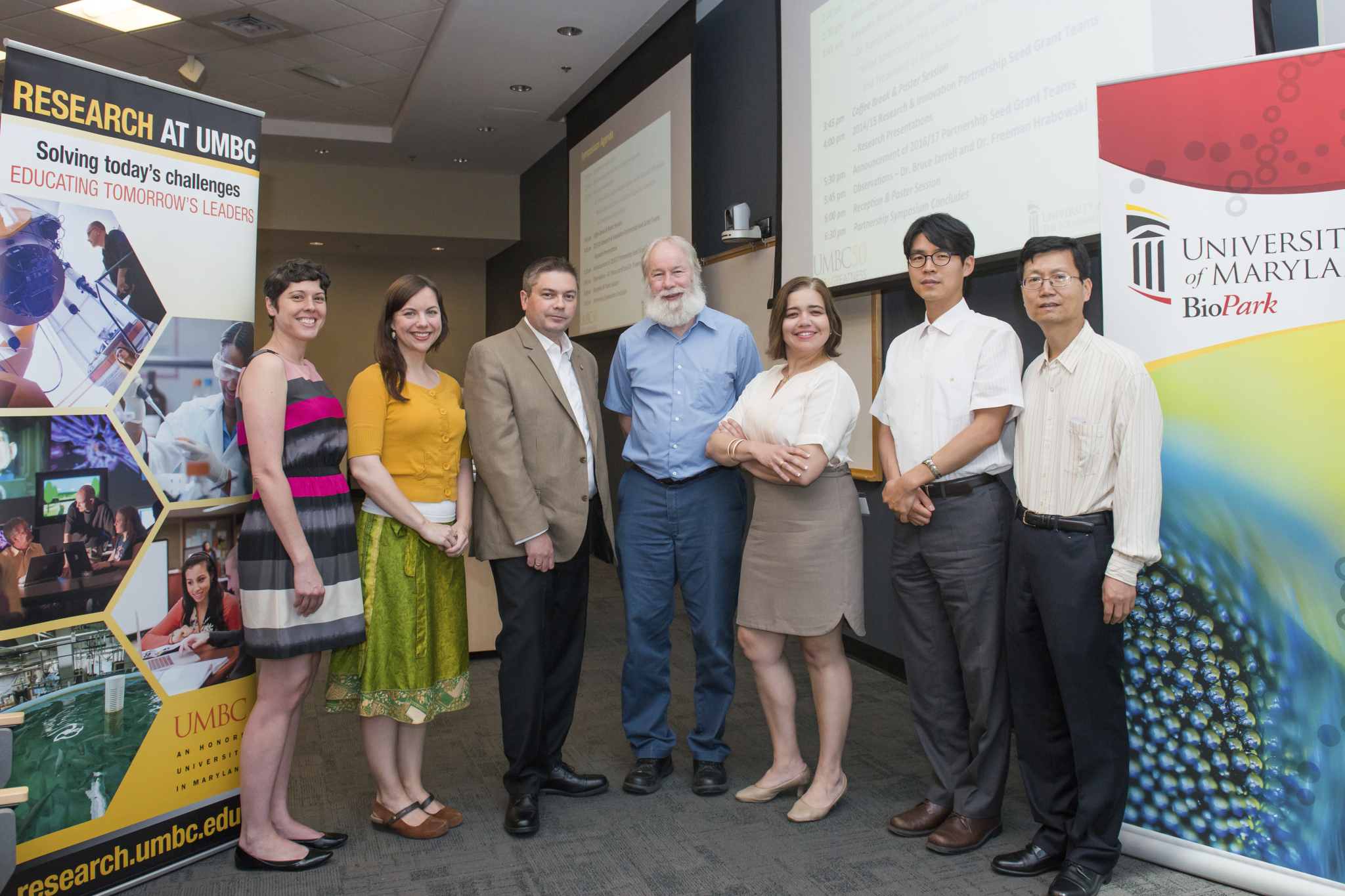 Christine Mair, second from left, at the UMB-UMBC Partnership Symposium. Photograph by Marlayna Demond ’11 for UMBC.

With START funding, Sarah Chard, associate professor of sociology, anthropology, and health administration policy, is studying the activity levels of older African-American adults in Baltimore who have diabetes. She is conducting interviews and observing patients to better understand how they experience and manage their illness, their social and physical environments, and how they maintain physical activity routines. This work is helping Chard to develop more effective programs to address health disparities among people with diabetes.

“The aim of my START-funded project is to identify how belief systems and social processes work together to inform physical activity routines among older adult African Americans with diabetes. The project builds on my earlier research on diabetes, which identified many barriers to physical activity for older adults living in Baltimore,” Chard says. “Through START funding, I’m able to shift my focus to look at persons who are engaging in physical activity to see how they create support systems and navigate local barriers. The findings will help address a critical gap in the literature regarding successful community-based physical activity.” Chard will use data from this research for an NIA grant proposal. 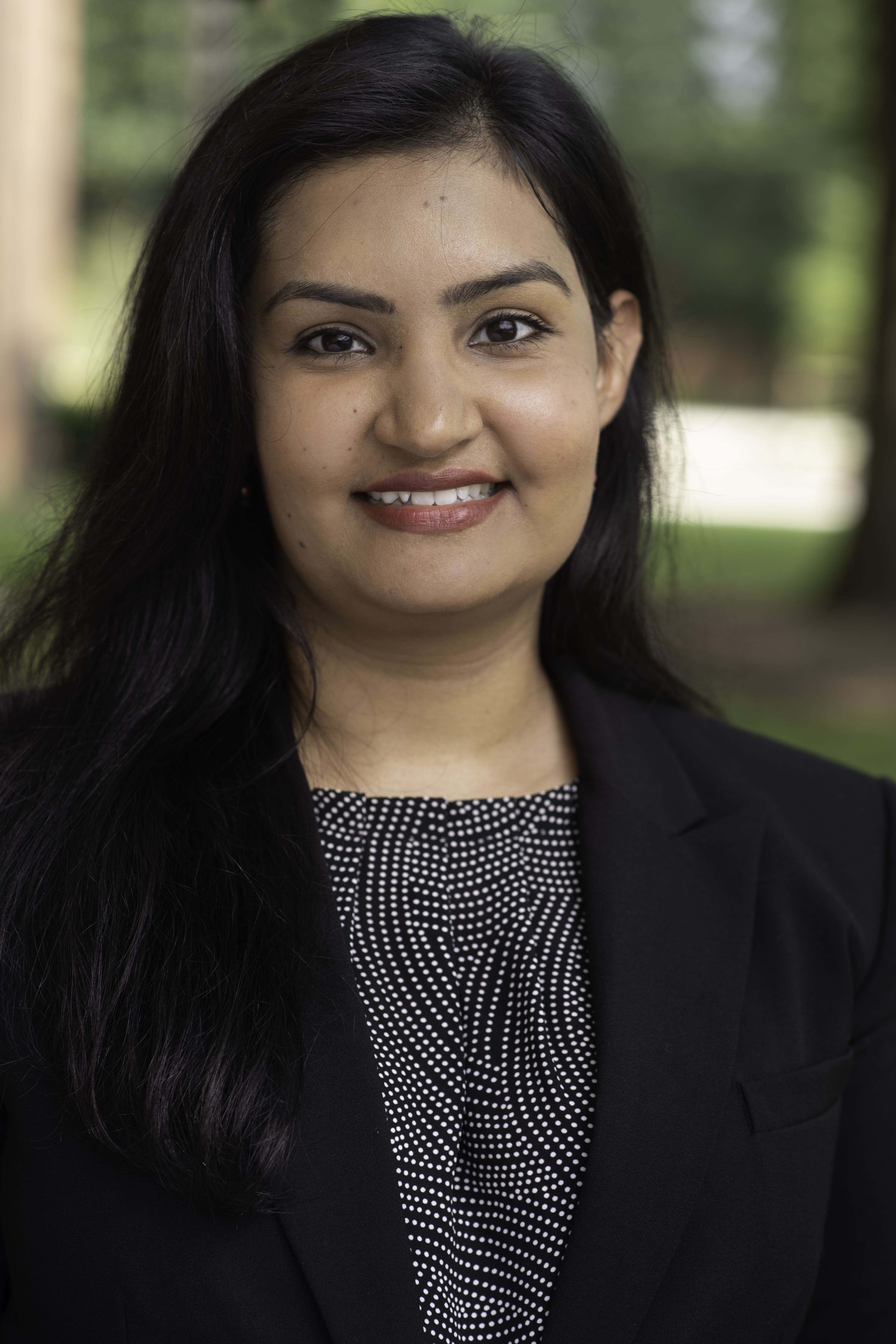 Tasneem Khambaty, assistant professor of psychology, is using her SURFF award to continue research studying the symptoms and biomarkers of type 2 diabetes, which disproportionately affects African Americans. Khambaty examined how depressive symptoms and executive function impact these biomarkers in the long term, utilizing data from the Healthy Aging in Neighborhoods of Diversity across the Life Span (HANDLS) study, which was conducted in Baltimore. Khambaty is using this research to build a proposal for an NIH Mentored Patient-Oriented Research Career Development Award.

Jiaqi Gong, assistant professor of information systems, is developing innovative ways to understand cognitive and neural systems, specifically in people with multiple sclerosis and ACL injuries. Wearable sensors don’t all work equally well for all people. Previously, Gong developed wearable sensors that perform better in people with multiple sclerosis at different stages. Through his SURFF-funded work, he is utilizing those sensors to study brain mechanisms that control automatic and unconscious motor action, to inform his teaching and further research. 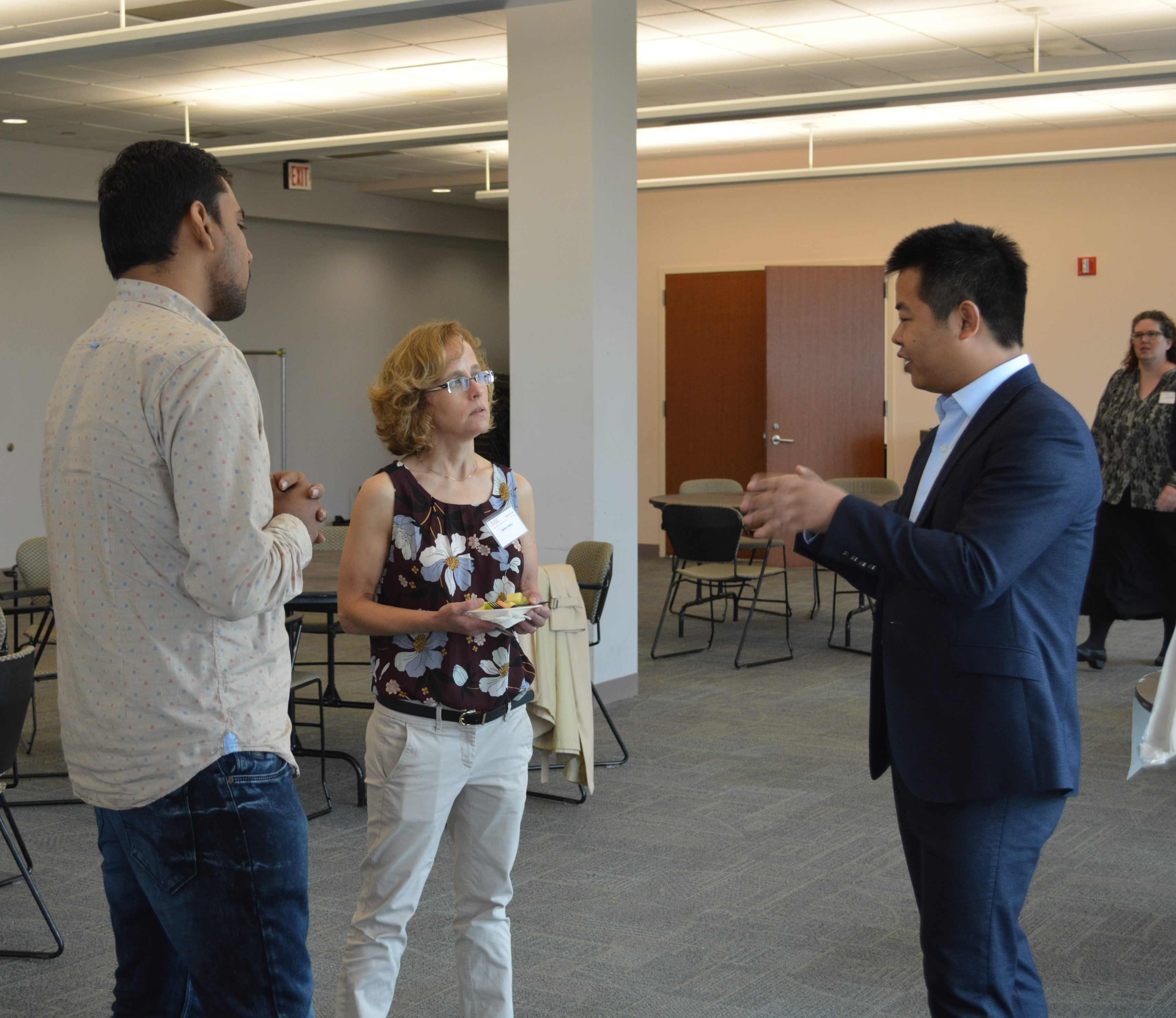 Drew Holladay, assistant professor of English, utilized SURFF funding to continue revisions of his 2017 dissertation “Articulating the New Normal(s): Mental Disability, Medical Discourse, and Rhetorical Action” for publication as a book. Holladay studies online discussion board posts written by people diagnosed with autism, post-traumatic stress disorder, and schizophrenia. He is expanding his earlier writing to include more linguistic analysis, analyzing how the medical community talks about these diagnoses, as well as adding in illustrations to complement the text. 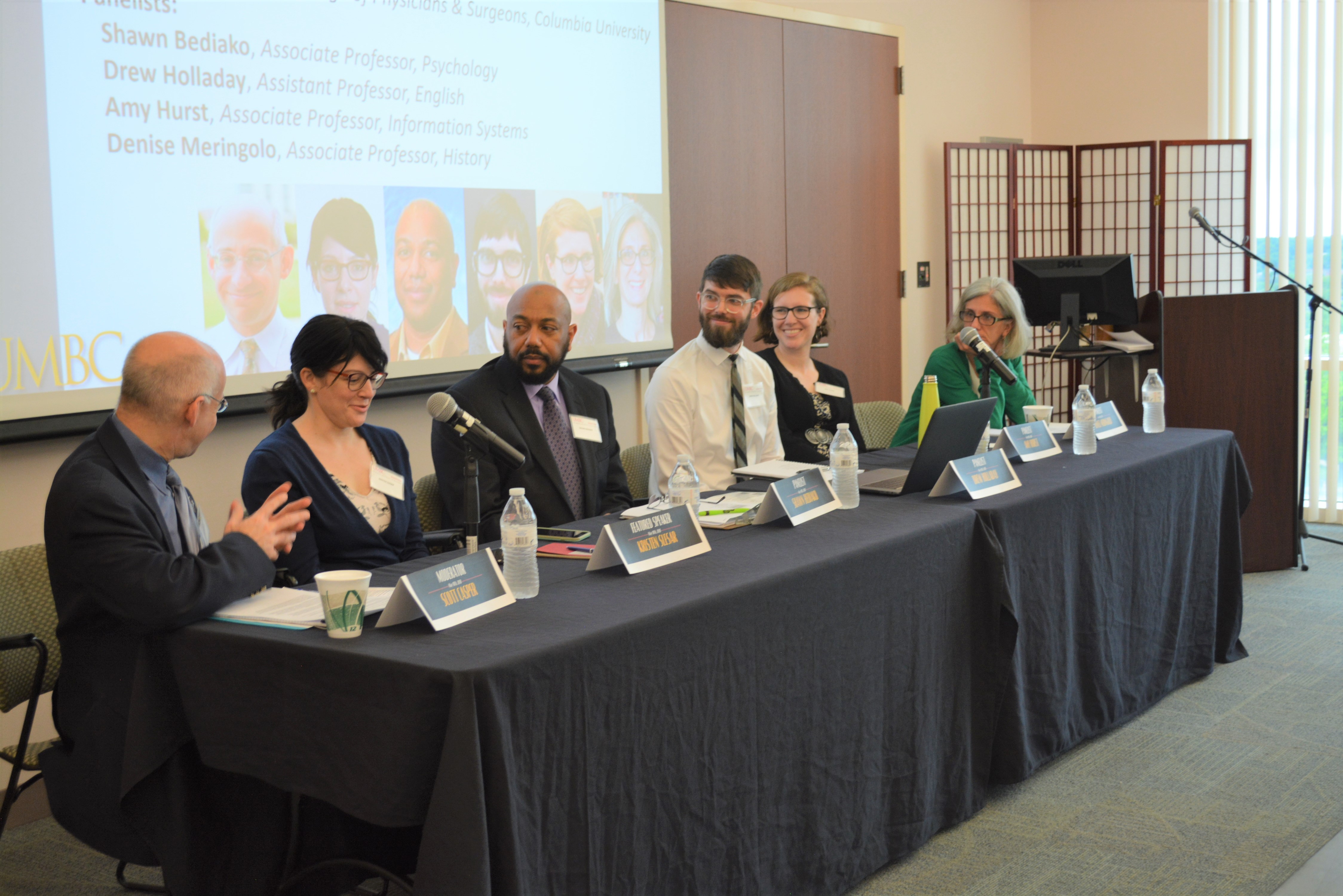 Cynthia Matuszek, assistant professor of computer science and electrical engineering (CSEE), was granted START funding to advance her work on robots that assist senior citizens in daily life and enable them to continue to live independently. She is collaborating with eldercare professionals to develop a library that will outline specific examples of how seniors can utilize assistive robots in daily life. Matuszek also received SURFF funding to develop a networking event at the Robotics: Science and Systems conference, to connect junior faculty and postdoctoral researchers with mentors in robotics.

Kathryn Bell, associate professor of visual arts, is using START funding to create Metempsychosis, a series of interactive digital video installations that combine art with science, technology, engineering, and math. She is shifting her work from project mapping art to art that is more accessible and less expensive to stage in galleries. Bell will travel to the United Kingdom to study under automata artist Matt Smith, who has exhibited at museums around the world.

Anne Rubin, professor of history, was awarded START funding to visualize the landscape of slavery and freedom in Early Baltimore. Rubin is building a virtual 3D prototype of early Baltimore between 1815 and 1820, in collaboration with UMBC’s Imaging Research Center.

Kathy Marmor, associate professor of visual arts, received START funding to create two new art installations called Mid-Life, inspired by the practice of compiling a book based personal knowledge, which has been common from the seventeenth century through modern times, and is based on one’s “habit of mind.” She is collaborating with faculty in UMBC’s English and computer science and electrical engineering departments. The installations will bring together digital and computer-based imagery, and analog drawings and fiber art to depict women facing mid-life challenges. 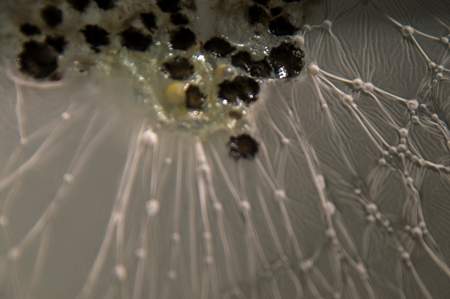 A photo from The Glass Knife exhibition, by Kathy Marmor and Stephen Bradley, which ran in 2016. Image by Stephen Bradley.Sarah Sharp, assistant professor of visual arts, is using START funding for her new project Off the Press. Sharp will look at small presses and self-published media from the women’s, gay rights, and environmental movements in the 1970s. She will examine the differences and similarities between common practices of that period and contemporary self-publishing practices, such as through social media and other online platforms. Sharp is combining traditional art practices, like quiltmaking and embroidery, with digital video, augmented reality, and 3D modeling.

Earl Brooks, assistant professor of English, utilized a SURFF award to continue his project Black Sonority: Rhetoric and Black Music. This work examines the intersections of Black music, life, and culture. Brooks explores the rhetorical nature of Black music and the various roles it had has in shaping public discussion.

Kindel Nash, associate professor of early childhood education, has received SURFF funding to study the relationship between culture, language, and literacy development for young children in the United States and Peru. Nash is examining highly effective literacy practices in U.S. and Peruvian primary schools, which both include populations that are historically underserved in educational settings. She will work to determine the practices’ commonalities and underlying principles, and whether the approaches would be transferable across cultures.

Salem Abo-Zaid, assistant professor of economics, studied attitudes toward immigrant and minority populations in a sample of European countries between 2002 and 2016. He used longitudinal data from the European Social Survey to understand how economic conditions have impacted tolerance toward people in these groups. Abo-Zaid found that economic conditions, in addition to security, political, and cultural tensions, impacted countries’ tolerance of immigrant and minority populations.

Melissa Bailey Kutner, assistant professor of ancient studies, used SURFF funding to complete her book about economics in the Roman Empire. As a part of this work, Kutner studied coins, measured instruments, and wrote accounts of documents found at specific archaeological sites. She looked at how communities used these tools to trace how they shared information and negotiated economic value. Kutner found that how Romans represented value depended on social context, and she developed a model to examine related historical changes across multiple regions.

Dillon Mahmoudi, assistant professor of geography and environmental systems, used SURFF funding to create a machine-learning algorithm to identify spaces for urban agriculture on single family tax lots. Mahmoudi will study whether urban agriculture plots are more frequently located in richer or poorer neighborhoods. This work focuses on the food production potential of lots in Seattle and Baltimore, expanding on prior research that analyzed lots through satellite images of Portland.

Tim Nohe, professor of visual arts and director of UMBC’s Center for Innovative Research in the Creative Arts, received START funding to use 360 degree immersive video and surround-sound technology to give people a deeper look into the environment through his project “Water Flowing Underground: Immersive Sound and Immersive Video Imaging.” His work will allow viewers to understand sources of pollution that impact Baltimore’s watershed. The research will reveal streams that have been used to collect raw sewage, or have been paved over, impacting the flow of water. 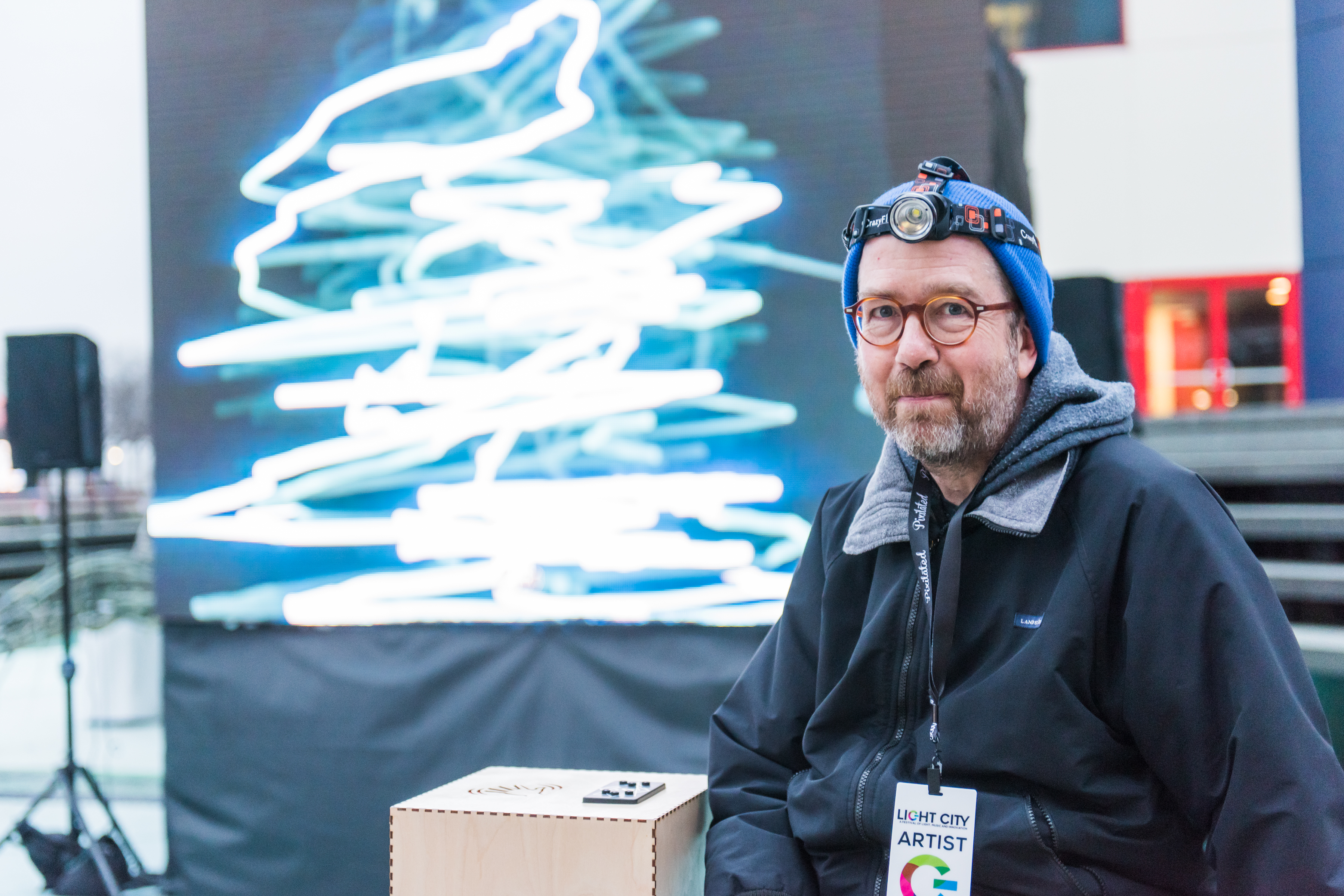 “This grant has allowed me to begin fieldwork and research on the fractured interface of Baltimore’s watershed and its sanitary sewer system. That breakdown is evident in my neighborhood, and throughout the city,” explains Nohe. “When the sewer system was nearing completion in 1909 it was called an ‘unexcelled marvel of the engineering world,’ but today sanitary sewers routinely spew waste into our streams, the bay, and city basements.”

Frank Ferraro, assistant professor of CSEE, used SURFF funding to advance his work in natural language processing. He studied how information extraction systems can help deconstruct and summarize highly complex documents. Over the summer, Ferraro developed, trained, and evaluated these systems to determine how they can be effectively used to can help people understand themes within dense and complicated texts.

Sisi Duan, assistant professor of information systems, used SURFF funding to study the scalability of blockchains—blocks of data linked using cryptography, that are resistant to tampering. She identified challenges that blockchain researchers sometimes face, and then redesigned and reimplemented a blockchain protocol called BChain, which she developed. Duan implemented BChain as part of the Hyperledger project, a global collaborative project aimed at advancing blockchain technologies across industries.

Curtis Menyuk, professor of CSEE, is working with collaborators at Bangladesh University of Engineering and Technology and at the Maryland Psychiatric Research Center to develop a model that can help explain what contributes to white matter deficits in the brain.

Theodosia Gougousi, professor of physics, received funding to address the shortage of semiconductor-compatible nonlinear optical materials. She will investigate the nonlinear properties of dielectric thin films and nanolaminates formed by atomic layer deposition. Her project is interdisciplinary, bridging the fields of electronics materials and nonlinear optics, with the goal of developing a broader materials toolkit that could be utilized for optoelectronic applications.

Gougousi explains that the funding will support the collaboration of her research group and that of Anthony Johnson, professor of physics. “Our groups have been working together for over a year,” she says. “We expect the award will enable us to complete the characterization of the structure and composition of these films, which is required for competitive proposals to national funding agencies.

Mercedes Burns, assistant professor of biological sciences, studied sexual reproduction in Japanese harvestman, an arachnid with long legs compared to other species. This work, supported by SURFF funding, allowed Burns to collect female Japanese harvestman in order to conduct genotyping analysis. During the summer, she attended the Society of Molecular Biology and Evolution scientific meeting to collaborate with fellow biologists from around the world.

Kathleen Cusick, assistant professor of biological sciences, received SURFF funding to characterize the role of an intracellular signaling molecule in bacteria that regulates cellular function, cell movement, intracellular communication, and how cells respond to the environment. The molecule (called c-di-GMP) has unique trails that make it a particularly good fit for this research into signaling networks.