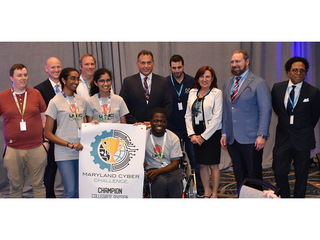 Busy teams of students clustered around laptops in a room overlooking Baltimore’s Inner Harbor on Tuesday, focused on solving as many challenges as possible during a “capture-the-flag” style competition. After hours of intense competition in cyberspace, UMBC’s team emerged victorious, named champions of the college division of the 2018 Maryland Cyber Challenge.

“It was my first time competing in the Maryland Cyber Challenge, although I have a pretty extensive competition background,” said Burke. “I am especially proud of my freshman teammates who put in a ton of effort, solved challenges, and didn’t get discouraged when the challenges got more difficult.”

Burke is a Center for Women in Technology (CWIT) Scholar and Mpere is a Cyber affiliate. Richards, Prakash, and Krithivasan all participate in UMBC’s Cyber Scholars Program, which works to prepare the next generation of cybersecurity professionals.

All five members of the winning team will receive a monetary award and an offer to complete a summer internship to continue growing their experience and skills. Additionally, the university will receive new technologies (including software) to support more UMBC students in developing their cybersecurity skills.

“The competition was a fantastic experience and gave me a lot of exposure into topics that I otherwise would not have gained, especially as a freshman,” said Krithivasan. “We had a mix of both upper and underclassmen on our team, which really enabled us to learn and grow from working with each other.”