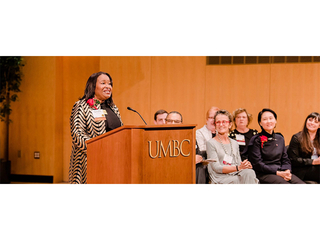 UMBC community members from the university’s first class to today kicked off Homecoming 2018 on October 4 with a celebration of UMBC Alumni Award winners. Held in the Earl and Danielle Linehan Concert Hall, the moving and memorable ceremony reflected the rich community that is UMBC and honored the tremendous achievements of eight exceptional awardees.

As the evening began, John Becker ’01, information systems, president of the UMBC Alumni Association, remarked, “The alumni and faculty we will recognize tonight truly capture the depth of the UMBC community.” President Freeman Hrabowski encouraged attendees to “listen, learn, and be inspired.”

Kimberly Ellison-Taylor ’93, information systems, received the 2018 Outstanding Alumna in Engineering and Information Technology Award. She bridges her knowledge in technology and finance as a global strategy director at Oracle. She is also the youngest person and first African-American woman to be elected as chair of the American Institute of Certified Public Accountants. 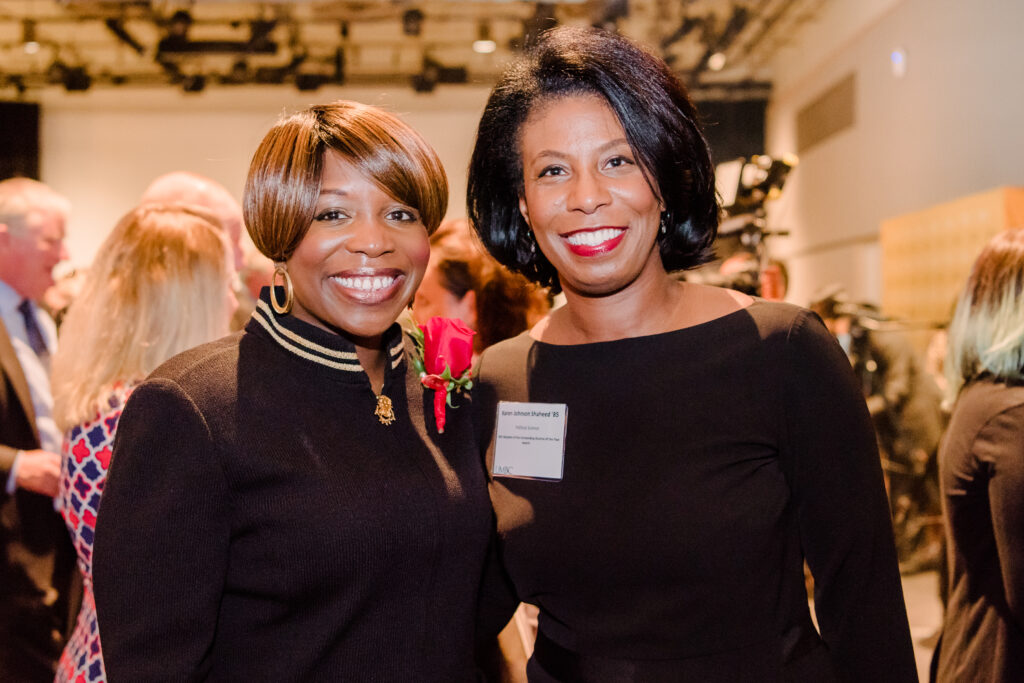 Greg Simmons, M.P.P. ’04, public policy, and vice president of institutional advancement, described Ellison-Taylor as “a visionary in her field” who can “see the future in the work that she does.” Still, he says, despite her success, “she’s never forgotten where she’s come from, and she’s made sure she’s opened pathways for others to have success that she’s modeled so well.”

Ellison-Taylor grew up in Baltimore’s Sandtown-Winchester neighborhood. “Statistically, I shouldn’t be here,” she shared, but “UMBC provided a foundation of unparalleled opportunity. It empowered, enabled, equipped, and energized me to succeed.”

Through her participation in the Sigma Gamma Rho sorority, Ellison-Taylor began paying it forward, supporting others in finding their paths. “Everyone deserves respect and dignity,” she said, “whether they’re the CEO or the janitor.”

As a child, Alkebsi was frustrated by the lack of accessibility for deaf and hard-of-hearing people like herself. She recalled attending a movie and seeing everyone around her laughing while she couldn’t follow the dialogue. So, at 11 years old, “I resolved that I was going to go to law school and advocate for full, equal access,” she told the crowd through an interpreter. “Now, here I am—in the trenches of the battle to break down barriers to accessibility for the Deaf and hard-of-hearing communities.” 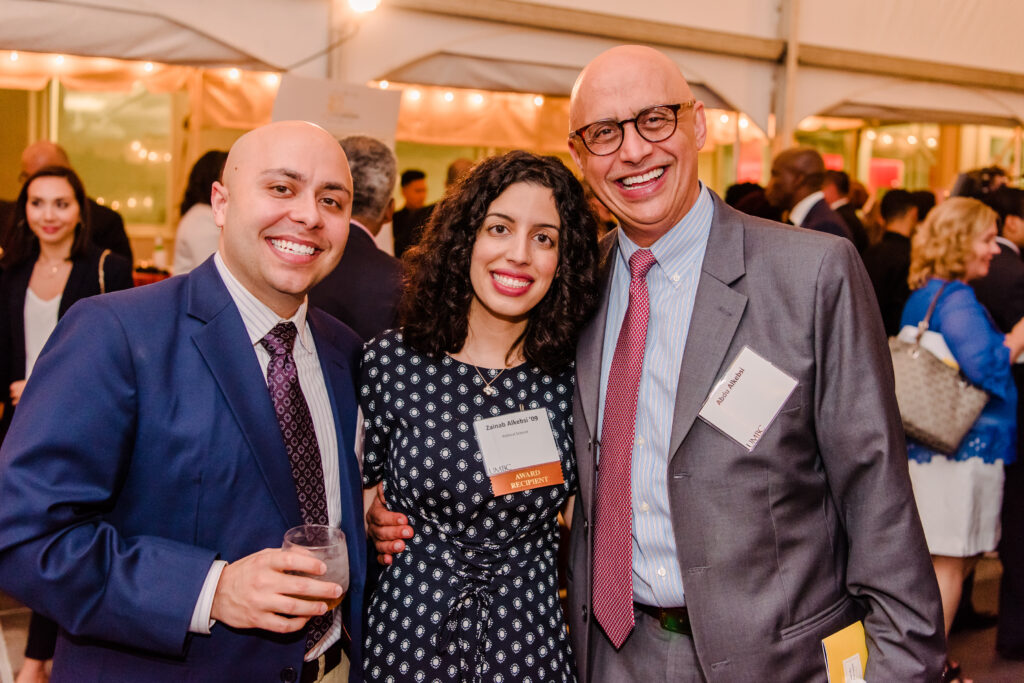 Among her many achievements as an advocate, Alkebsi recently negotiated 100 percent captioning for in-flight entertainment on several major airlines. Now a mother, she imagines her daughter “boarding a flight and knowing the role her mother played in ensuring greater accessibility.”

Alkebsi thanked her UMBC professors for encouraging her personal and professional growth. She shared that she continues to give back to UMBC by presenting guest lectures focused on the Deaf community.

Kathleen Hoffman, mathematics, and David Mitch, economics, introduced Mark Doms ’86, mathematics and economics, the 2018 Outstanding Alumnus in Natural and Mathematical Sciences Award recipient. A leading economic policy expert, Doms served on the Board of Governors for the Federal Reserve and as the Under Secretary for Economic Affairs at the Department of Commerce under the Obama administration, and worked at Japan’s largest investment bank.

“I couldn’t have gotten a better education anywhere else,” Doms shared, of his time at UMBC. His math classes taught him to analyze data appropriately, and his economics classes taught him “how to think about the world’s problems in a rigorous manner.”

In addition to a strong academic preparation, “UMBC instilled in me a sense of public service,” Doms said. His career has been primarily in the public sector, and he intends to teach at a public university when he returns to the United States from his current work in Europe. 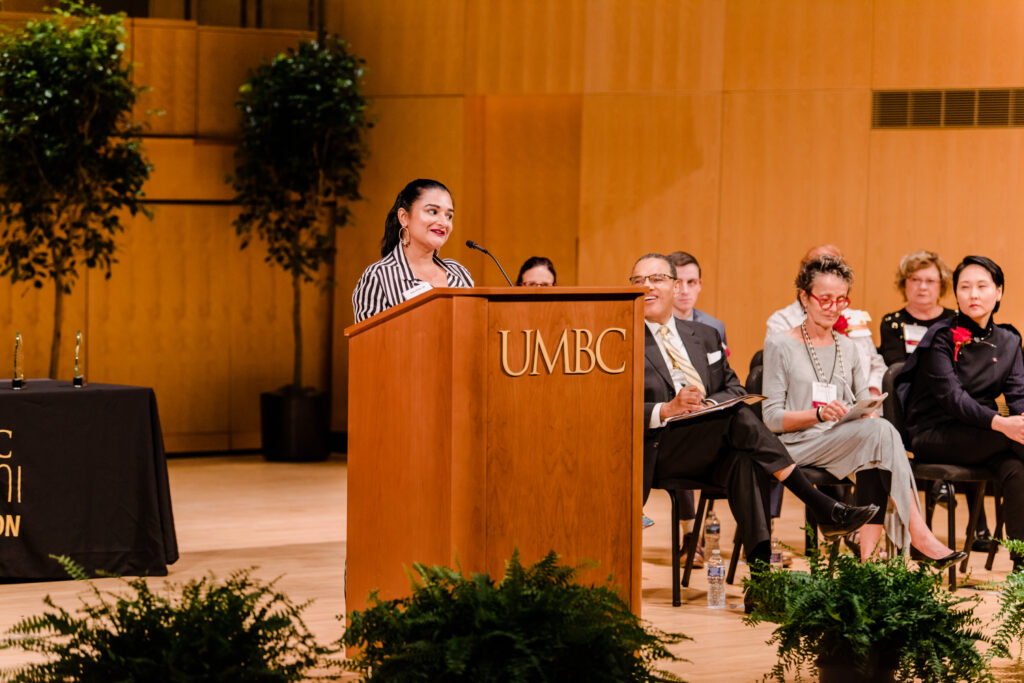 Saira Khan ’09, English, is UMBC’s 2018 Outstanding Alumna in the Humanities. Chris Corbett, English, noted, “She has achieved more in just a few years than some aspiring journalists achieve in an entire career.”

Khan began her career as a freelancer for Dawn, an English-language publication in her native Pakistan, “moving seamlessly between two very complicated worlds,” Corbett said. Less than a decade later, she is now director of social media for The New Yorker.

Attending UMBC was “one of the best decisions I have made in my life,” Khan shared. “I left this place with relationships that I have carried with me for the last 10 years, and I know I will have them with me for the rest of my life. For that, I will be forever grateful.”

Mina Cheon, M.F.A. ’02, imaging and digital arts, also moves seamless between worlds, from Korea to New York City to UMBC. She says “artists are agents of change,” and they become leaders who “perform art projects in social spaces that matter.”

Her often-controversial art includes a series of political videos framed as art history lessons, which she placed on flash drives inside balloons and launched from South Korea over the border with North Korea. The South Korean president and first lady visited her most recent exhibition. 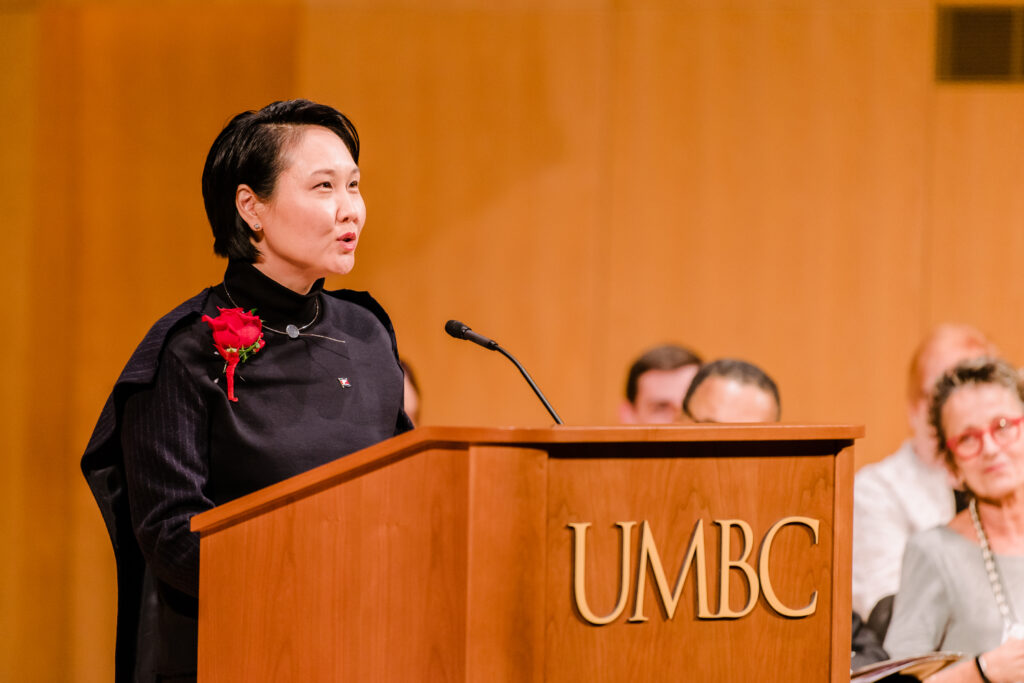 Cheon’s connection to the university has been long-lasting. She graduated from UMBC with her infant son in her arms, and now he is studying math at UMBC. “Thank you for being the leading, visionary STEAM research community where I grew abundantly and where my son will be nurtured to flourish in his academic track,” she shared.

Cheon also mentioned her gratitude for UMBC faculty and staff’s dedication to “shaping the future by empowering the artist in society.” Her nominator, Kathy O’Dell, visual arts, said simply, “Dr. Cheon is a treasure.” 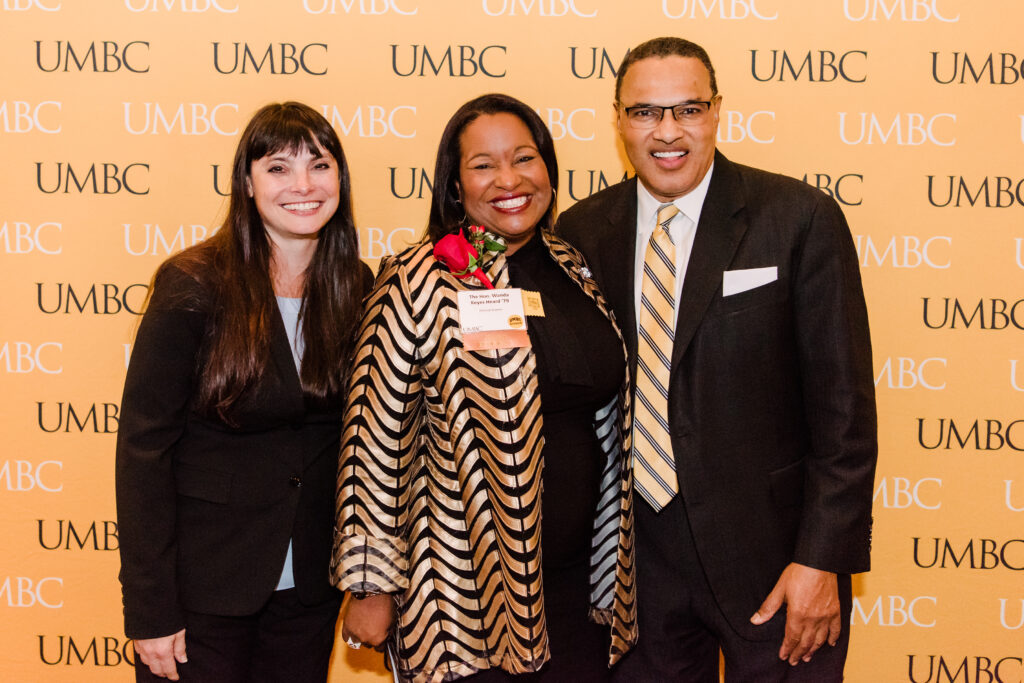 “UMBC helped prepare me to accomplish my professional goals,” she says, “to break through race and gender bias and barriers, because I was a woman headed into a field where people just didn’t look like me.”

Like other recipients, Keyes Heard also talked about relationships and community. “I embraced this campus, and it embraced me,” she said. She described UMBC as “not only my academic home, but my home away from home.” Many of her former classmates, who remain her close friends, attended the ceremony to cheer her achievement. “They’re here tonight,” Keyes Heard said, “because they are still my family after 40 years.”

“We planted the seeds for UMBC’s greatness many years ago just by believing in a new university,” she shared. She chose to attend because Albin O. Kuhn, UMBC’s first president, “promised that we would be pioneers.” 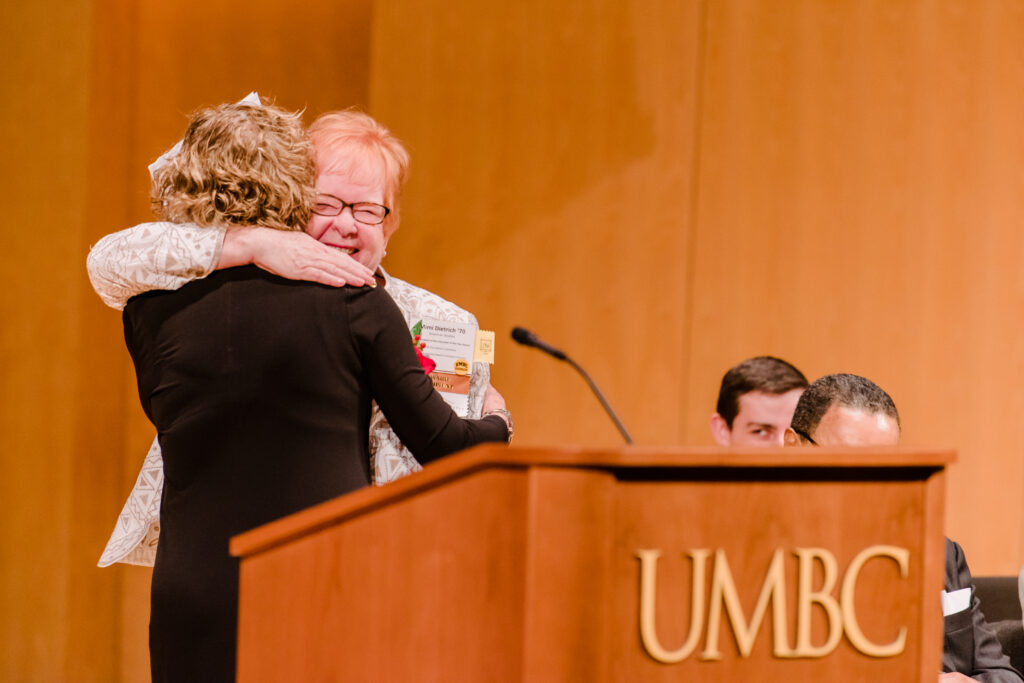 For UMBC’s 50th anniversary, Dietrich was one of the first to galvanize alumni to organize and participate in the celebrations. She continues to serve UMBC by organizing Fab Four events. She previously served on the Alumni Association Board of Directors and was named UMBC Volunteer of the Year in 1999 along with her husband, Bob Dietrich ’70, biological sciences.

Professionally, Dietrich has been dedicated to spreading her love of quilting and needlework as an educator for 50 years. She was inducted into the Quilters Hall of Fame in 2015 and named the Professional Quilter of the Year in 2013.

Mariajose Castellanos, chemical, biochemical, and environmental engineering, is the 2018 Outstanding Faculty Award recipient. Castellanos, a teaching faculty member, expressed gratitude that her department supported her when she “chose to pursue teaching and leadership through service,” rather than continue in research. 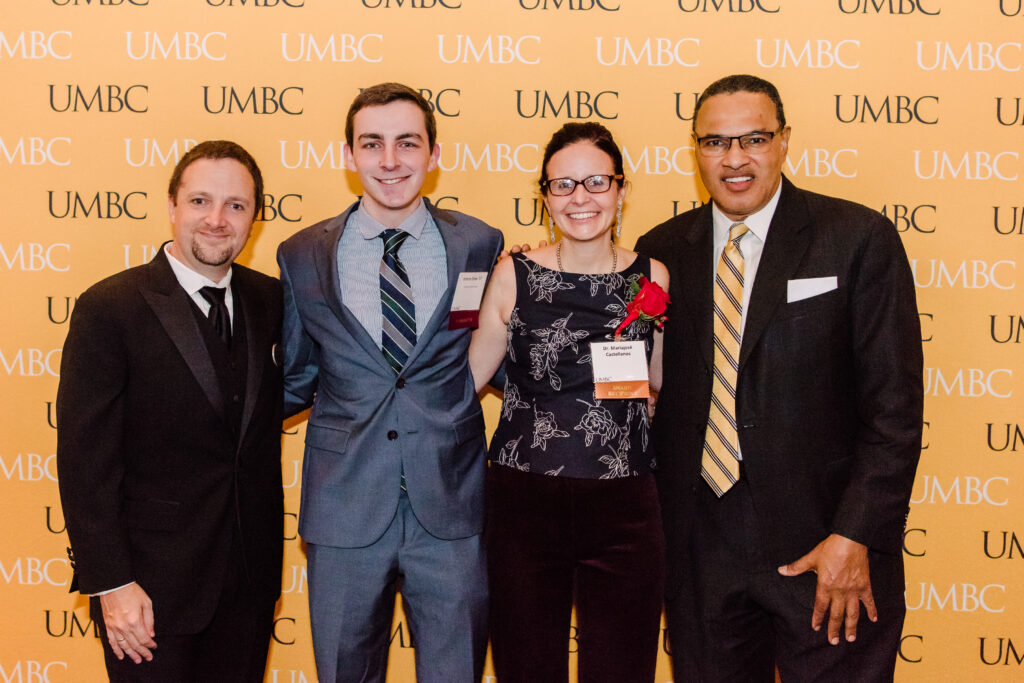 Jeremy Drew ’17, chemical engineering, reflected on the great impact of her work as an educator, for him and so many others. “She showed me the value of trying a problem I wasn’t sure how to solve,” said Drew. He continued,“Dr. C. cares about the well-being of her students, and adapts to each of their individual needs in order to bring them the most comprehensive education possible.”

Throughout the event, speaker after speaker reflected on meaningful friendships and strong bonds with mentors at UMBC—connections that have lasted over decades. President Hrabowski drew on this theme as he offered closing remarks. “The older I get, the more I realize there’s nothing more important than friends and family,” he said. “It is the notion of community through which we are all connected.”