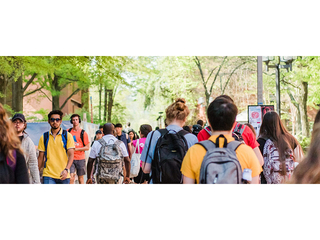 Over the past two decades, UMBC and the National Security Agency (NSA) have developed a strong relationship, which has led to research, internship, and career opportunities for faculty, students, and alumni. UMBC is the first institution to be highlighted in NSA’s Featured School Series, which launched on September 4.

“UMBC’s long-standing partnership with NSA has provided valuable experiences for our students, faculty, and alumni to pursue internships, careers, and collaborative research opportunities,” said President Freeman Hrabowski. “Through this work we are helping to address the need for well-trained cyber professionals by creating a network of talented people to protect the state, nation, and world.”

More than 1100 NSA employees are UMBC alumni, including Darniet Jennings ‘98, M.S. ‘99, Ph.D. ‘03, information systems management. Jennings continued his dissertation research when he took a job at NSA, where he developed a system to manage big data effectively, which was patented in 2010.

The opportunities at NSA include careers in a broad range of disciplines including cybersecurity, engineering, computer science, language, and biological and chemical sciences. Regina Hambleton ‘87, mathematics, has held a number of positions at NSA and is currently the Agency’s deputy director of Engagement and Policy. She began working at NSA while she was a student at UMBC, and participated in a program that allowed her to spend a semester at UMBC taking courses followed by a semester working at NSA.

The partnership between NSA and UMBC also helps prepare an increasing number of graduates for careers in cybersecurity-related fields, to protect the nation from cyber threats.

Charles Nicholas, professor of computer science and electrical engineering, is also highlighted in the Featured School Series campaign. He has spent two sabbaticals at NSA during his time at UMBC, and has mentored students who completed NSA internships, in addition to students who went on to pursue careers at NSA. Nicholas is interested in the intersection of cybersecurity and data science, and the tools that are used to compare malware specimens.

“There are so many opportunities in the intelligence community, including at NSA,” Nicholas says. “It is important for students interested in those careers to develop technical ability, as well as critical and creative thinking, and I enjoy the chance to help them grow those skills.”

For more information about the partnership, and a few UMBC alumni who work at NSA, visit the UMBC page on the NSA website.