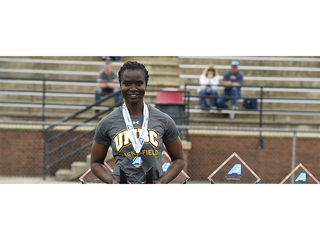 UMBC closed out the track and field season strong as two Retrievers competed at the highest collegiate level last week, traveling to Eugene, Oregon, for the NCAA Division I Men’s and Women’s Track and Field Championships.

Freshman Kelechi Nwanaga, financial economics, qualified for javelin finals with a throw of 51.18 meters, landing in sixth place. In the finals, Nwanaga threw an impressive 55.02 meters, setting her personal best and rebreaking the UMBC record.

Nwanaga finished in fourth place overall, earning First Team All-America Honors, the sixth track and field athlete to do so in UMBC history. She originally set the school record and the America East record at the America East Outdoor Championships in May.

“It was a good experience with it being my first time in the championship competition,” said Nwanaga. “My goal was to finish in the top five, and finishing fourth was a good feeling.”

Also competing in the javelin, Tony White ‘18, mechanical engineering, came in at 16th after throwing 65.71 meters. “It was a surreal experience,” he shared. “Being able to compete against elite athletes was amazing. The competition level at the NCAA Championships is on a level unlike anything else.”

In early May, White won gold at the America East Championships and was named to Second Team All-American by the United States Track and Field/Cross Country Coaches Association.

“It was a privilege to coach these two this year,” said  Peter Koumlelis, track and field throws coach. “We were one of eight Division I schools to have athletes in both the men’s and women’s javelin competitions at the NCAA Championships. They worked so hard to achieve all that they have this year.”