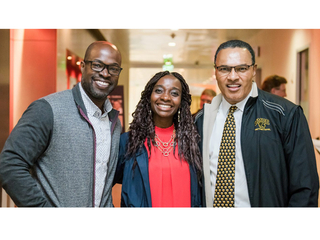 Nine distinguished faculty and alumni shared their stories at GRIT-X, a TED talk-style event during UMBC’s Homecoming. Karl Steiner, UMBC vice president for research, introduced the event, which debuted at last year’s 50th anniversary celebration. “We’ll take you from outer space to inner space,” he said, “from black holes in the universe to a pacemaker for the brain.”

Kafui Dzirasa ’01, chemical engineering, kicked off the program by discussing the latter. Now associate professor of psychiatry and behavioral sciences at the Duke School of Medicine, Dzirasa has a personal connection to his groundbreaking work. “My family has struggled with mental illness for generations,” he shares. While much mental health research has focused on chemical imbalances in the brain, Dzirasa is using new tools and techniques to detect rhythmic waves of electric pulses in the active brain.

“These rhythms work together in the same way that a conductor can allow all the instruments in a symphony orchestra to work together to produce music,” he says. “These little rhythms allow brain cells to coordinate—to produce motions, and thoughts, and feelings.” He calls these rhythms the “metronomic system” of the brain, and is investigating whether psychiatric disorders, such as bipolar and schizophrenia, are a result of faulty metronomes. Dzirasa’s lab is learning about how these metronomes function through animal studies, and he hopes to one day apply the results to humans.

“In the future that I see, our family members would have lived out their life’s greatest dreams,” he says, “because we won’t simply treat psychiatric disorders by tuning electricity, we will cure them.” Christine Mallinson, professor of language, literacy, and culture, discusses her research on linguistic diversity in schools.

Christine Mallinson, professor of language, literacy, and culture, is looking to cure a different ill: the negative biases teachers may harbor against students who speak differently than they do, even if they’re speaking English. Hearing “coffee” pronounced several different ways as a child sparked Mallinson’s lifelong interest in linguistic diversity, which she says “is a resource, not a deficit.”

Demonstrating the value of diverse linguistic patterns in the classroom shows students they are valued, which makes them likely to value school, Mallinson explains. Overall, educators must “give the students the tools they need  to succeed on the tests that we require of them, while sustaining and empowering their diverse voices,” she says, “so that we can have all our students with all their diverse voices right here in the front row of our classes at UMBC.” Nilanjan Banerjee, associate professor of computer science and electrical engineering, says we are “on the brink of a revolution” in wearable devices.

Nilanjan Banerjee, associate professor of computer science and electrical engineering, is working on wearable sensors—communication of a very different kind. After the iPhone revolutionized “smart” technology in 2007, he says, “Ten years later, we are at the brink of yet another revolution: the revolution of the next generation of wearables.”

Banerjee explained how these tiny computers can make people with spinal injuries more independent, by allowing them to control appliances or communicate via motions as minute as tongue movements. Ankle straps could track health-related statistics from sleep patterns to cardiac conditions, reducing the strain on clinics facing an ever-increasing demand for services as the population ages. Banerjee also sees applications in driving safety, with sensors able to detect whole-body movements that may indicate distracted, drunk, or drowsy driving.

Banerjee acknowledges that “all of these sensors are useless unless people use them,” so this work requires perspective from an array of disciplines, such as human-centered computing, design, software development, and materials science. And of course, privacy and ethics concerns loom large when devices are collecting this much data. To conclude, Banerjee encouraged audience members to “think about what you want these next-generation wearables to do, and more importantly, think about what you want them not to do.”

Sean Pang ’09, English, and M.A. ’11, teaching, chats with his wife (right) and President Hrabowski (left) after his presentation.

The second session began with Sean Pang ’09, English, and M.A. ’11, teaching, who recounted his “fortune of misfortunes,” including culture shock and a language barrier upon his immigration to the U.S. as a small child, and poverty and eviction during his undergraduate studies. When he started teaching in Baltimore City after graduating from UMBC, he was the only Asian person in the room, but his background of challenges helped him connect with students. “When they see me come into the classroom, with a smile on my face, with passion, and dedication, and kindness, they see hope,” he shares, “hope that they can make something better from their lives.”

Pang, who was The Washington Post’s 2017 Teacher of the Year, had three recommendations for audience members. First, he said, be kind. In kindergarten, a classmate gave him a plastic dinosaur that Pang keeps to this day—it was the first act of kindness he remembers from a peer in the U.S. Second, “Try everything, because that will lead you to find your passion.” And once you find it, “use it to give hope, because hope is the greatest gift you can give.” Gymama Slaughter, associate professor of computer science and electrical engineering, is hoping for a future of implantable medical devices that are safe, environmentally friendly, and powered by the metabolism of our own bodies. Her lab has created thin membranes made of nanocellulose—a flexible, permeable, transparent, biocompatible material produced by genetically engineered bacteria—and tiny attachable circuits that harness the body’s energy. Because the byproduct of the energy production process is simply water, it’s completely safe.

So far, Slaughter’s bio-power devices, only a few millimeters on a side, can light up an LED light. “This gives us hope that eventually, with such a small device, we can develop a power system that harnesses the biochemical energy of glucose within our body,” she says, “to power implantable devices that can monitor disease, diagnose diseases, and one day deliver therapeutics into our body to enable our bodies to heal.” Kate Brown, professor of history, describes how families living near the Chernobyl disaster pick and sell radioactive berries that will enter the European market labeled only as “wild and organic.”

Kate Brown, professor of history, closed the second session with a talk on radioactive blueberries. Brown traveled to the Chernobyl zone expecting to find sadness and isolation. Instead, she found a booming, revitalized economy based on foraging—blueberries in the summer, cranberries and mushrooms in the fall.

“These women and children pickers have made it happen with human-powered resourcefulness. So economically it’s a good idea,” Brown says. “What about biologically? That’s a trickier question.” Brown explains that berries are extremely efficient at absorbing radiation from the soil, and limits have been set on the radiation level allowed in the EU market. But the berries are simply marked as “wild and organic,” so consumers have no idea they are ingesting radiation. There is very little research on the effects of long-term, low-dose exposure to radiation, but in the area surrounding the berry picking region, birth defects are six times as high as the European average.

“I’m here to tell you that even though we think of Chernobyl as something that’s very far away, it’s being brought to us by the global market that’s been so successful,” Brown says. She recommends paying the pickers the same amount to pick the berries, except then disposing of them as waste in the effort to reduce radiation in the area.. Brown even speculates that tourists might be willing to pay to experience picking radioactive berries. “That might be a better way of solving this problem, than just pretending it’s not happening.” Jane Turner, director of UMBC’s Center for Space Sciences and Technology, explains her research on the relationship between black holes and galaxy formation.

Next, Jane Turner, director of UMBC’s Center for Space Sciences and Technology and professor of physics, took listeners much, much farther away to black holes at the centers of galaxies. The Milky Way contains a black hole 2.6 million times as massive as our Sun, she explained, and “there’s evidence for supermassive black holes at the center of all galaxy nuclei. This is one of the big discoveries of the last decade or so in astronomy.” These black holes are proportional in mass to the mass of the galaxy they’re in, so “these things must grow together,” she says.

Most of the black holes at the centers of galaxies are dark and only detected by their gravitational influence, but a few percent emit an incredible amount of light—these are called “active nuclei.” Turner’s work involves investigating why those few are so bright, by looking at X-rays coming from very close to the black hole “event horizon,” beyond which we cannot make observations. These X-rays can tell scientists about what material is present close to the black hole and how that material is moving. Astrophysicists like Turner have found that black holes are pulling in about one star’s-worth of material per year, which is “enough to feed these active nuclei.”  The black holes are also pushing some of that material back out —enough to affect star formation in the surrounding galaxy. It’s by analyzing results like these, Turner says, that “we’re going to be able to understand the connection between the growth of the black hole and the host galaxy, and from that the growth of structure in the universe on the whole.” While black holes are helping build galaxies far away, Corey Fleischer ’08, mechanical engineering, is helping people build things in Maryland. As co-founder and general manager of The Foundery, a makerspace in Baltimore, Fleischer’s goal “is to have anybody walk in with a hand sketch on a napkin, for a product or an invention they want to build, and with our tools and classes be able to walk out with a polished, professional-looking prototype.”

Fleischer’s career path has been largely informed by his experience on UMBC’s mini-Baja team, which involved designing and constructing a one-person vehicle and then navigating it around an obstacle course at competitions. “We were learning textbook knowledge in classrooms, but at the same time we were learning firsthand how to build things,” he says. The Foundery provides a space for people with ideas to make them reality, and quickly, by speeding up the design feedback cycle—which involves a lot of failure. “Failure is an empowering way to learn,” Fleischer says. “And makerspaces allow people to fail faster.” Finally, Doug Hamby, associate professor of dance, and two UMBC dance students created an original dance right before the audience’s eyes. Hamby gave them instructions and they absorbed them on the spot, performing turns, rolls, and pliés to the audience’s delight. “When I make a dance,” Hamby shared as he moved fluidly across the stage, “I like to think of it as an investigation of the human body in motion, and in space, and in time.”

After the dancers performed the full sequence to close the program, Hamby tied all the GRIT-X talks together. “That’s one of the ways art is made,” he said, “through serendipity and experimentation.” Replace “art” with language, science, or technology, and the statement holds. UMBC faculty and alumni are creatively exploring the edge of knowledge, and the physical and mental world, from inner to outer space—from black holes to brain pacemakers, from language usage to radioactive fallout, from driver safety to dance—and sharing it with the world.