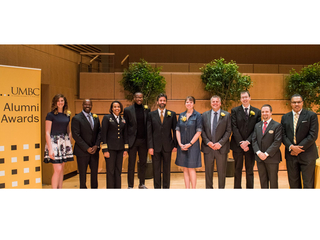 The UMBC community gathered for the 2017 UMBC Alumni Awards on October 5 in the Linehan Concert Hall to celebrate individuals who have made impressive contributions to society through their work. The UMBC Alumni Awards are held annually as part of Homecoming week, which welcomes alumni and members of the community back to campus for a range of events. This year, eight awards were presented to alumni and members of the community across all Colleges and from a range of disciplines.

“I’m thrilled that the legacy of excellence embodied by these amazing individuals can be shared this evening and for many years to come,” said John Becker ’01, information systems management, president of the Alumni Association board.

“Tonight you will hear from people from a range of disciplines. You will get a sense of people who are already at the top of their fields and others who are rising stars,” shared President Freeman Hrabowski. “Across these disciplines you will see UMBC graduates, from undergraduates to Ph.D graduates, doing very well. Tonight we get a chance to celebrate a lot of grit, a lot of hard work, and wonderful moments of greatness.”

Mark Marten, professor and chair of chemical, biochemical and environmental engineering, introduced Kafui Dzirasa ’01, M8, chemical engineering, calling him a “powerhouse,” mentor, teacher, motivator and life coach. “Our honoree is recognized not only for his research and scientific expertise but also for his compassion for his patients, and his determination to pay it forward to the next generation of young scientists,” said Marten.

Today, Dzirasa is an associate professor of psychiatry, behavioral science, neurobiology, and neurosurgery at Duke University School of Medicine. He explains how he grew up in a family that was always “competing with integrity,” which helped shape him into the leader and person he is today. K. Dzirasa, who received the Outstanding Alumnus, Engineering and Information Technology Award, inspired the audience to “see one, do one, teach many.” Dzirasa’s two brothers also graduated from UMBC, including Delali Dzirasa ‘04, computer engineering, who received the 2012 Rising Star Award from the UMBC Alumni Association. Kate Laskowski ’06, biological sciences and chemistry, the recipient of the Outstanding Alumna, Natural and Mathematical Sciences award was introduced by Jeff Leips, professor of biological sciences. Laskowski is a scientist in the department of biology and ecology of fishes at the Leibniz-Institute of Freshwater Ecology and Inland Fisheries in Germany. She explained that her love of science began during the introductory biology course that focused on ecology and evolution that Leips taught, which she guest taught during her time on campus for the Alumni Awards. “Standing in the front of the classroom telling the students about the research that I now do, in the class that actually excited my interest in research was totally surreal,” she said. “It was one of these things that came full circle.”

Laskowski stood out in a class of 350 students, recalled Leips. “She stood out as someone who was very engaged. Her curiosity, her need to know really stood out as an undergraduate,” Leips said. Because of this curiosity, Laskowski was one of the first undergraduate students to work in Leips’ lab, and she laid the groundwork for several Ph.D. and master’s students who came after her. Kimberly Moffitt, associate professor of American studies, introduced Dennis Williams II ’14, American studies, who received the Outstanding Alumnus, Humanities award. Williams is the head of content marketing for Skillshare, is an Oculus Content Fellow, and was named one of LinkedIn’s Top Voices in 2016. Moffitt said that Williams has “made a career out of storytelling.” Williams uses film to tell compelling stories about his life. “I found myself inspired by his determination, drive, and optimism,” Moffitt shared.

Williams talked about the unknown in life, and how people can thrive during uncertain times by looking inward and building their own paths. “We rarely know what the next step is and we rarely have it all figured out,” he said. “That was the epitome of my time at UMBC. I didn’t have it figured out when I got here.” Linda Dusman, professor and chair of music, nominated Alejandro Cremaschi ’93, music, for the Outstanding Alumnus, Visual and Performing Arts award. She explained that while Cremaschi was not one of her students, she enjoyed his performance at UMBC earlier in the semester that highlighted Latin American composers, and is inspired by his teaching style. “It was wonderful to see the artistry and pedagogical brilliance of this alumnus,” Dusman said.

He recalls coming to UMBC as an international student from Argentina, and says that he “was very fortunate to find a lot of loving people and friends” at UMBC. Nancy Miller, professor of public policy, introduced Sylvia Trent-Adams Ph.D. ’06, public policy, saying she is “committed to public service, research, and improving the quality of healthcare for the most vulnerable populations.” Trent-Adams, who received this year’s award for Outstanding Alumna, Social and Behavioral Sciences, currently serves as the Deputy Surgeon General for the United States, and is a Rear Admiral in the U.S. Public Health Service Commissioned Corps. Earlier this year, she served as the acting U.S. Surgeon General.

Trent-Adams said that her passion for helping people, particularly those who are underserved, was one of the reasons that she became a nurse. By working with researchers and individuals in the public health industry, she explained that she has grown and pushed herself past the limits she thought she had, and that UMBC provided a framework to think outside the box. “What UMBC prepared me to do was stretch my knowledge, to put on a different thinking cap about what was possible for a nurse and for a young woman who came from a family with low educational attainment,” she said. Storck, an additive manufacturing application engineer at the Johns Hopkins University Applied Physics Lab, explained how UMBC enables innovation and how people at UMBC are willing to help make your vision a reality. “UMBC is an environment where each individual can leave their fingerprint on the culture, and really change it and shape it and make it their own,” he said. Lauren Mazzoli ’15, computer science and mathematics, M.S. ’17, computer science, was in the first cohort of UMBC’s Cyber Scholars program and received the 2017 Rising Star award. Cindy Greenwood, assistant director for the Center for Women in Technology, said that Mazzoli is “a role model for our current students in the Cyber Scholars program, and other women in the field.” As the liaison between CWIT programs and Northrop Grumman, Mazzoli has helped coordinate a range of events to strengthen the relationship between UMBC and Northrop Grumman, explained Greenwood.

Mazzoli’s passion is educating women and children of all backgrounds about the field of cybersecurity. Her work at Northrop Grumman has allowed her to pursue her passion while giving back to UMBC. “UMBC is the house of grit, which means you’re going to work hard,” said Mazzoli. “These faculty members are going to give you a lot of work and they have high standards. It also means that when you find something that you are really passionate about you will have the courage, strive, and strength of character to pursue it.” The 2017 Outstanding Faculty award was presented to Marc Zupan, associate professor of mechanical engineering. Asynith Palmer ’06, English, who has worked with Zupan to secure funding and design curriculum for the Global Engineering Program, and to infuse elements of the humanities into engineering courses, said she has seen the lengths that Zupan will go to connect students with industry professionals.

“It’s amazing to me how confidently UMBC alumni go around knowing that the world will be changed by their example,” Zupan said. “When you were admitted to UMBC it was because of one simple idiom. You showed promise. As I continue to interact and speak with UMBC alumni, I see that they have promise. You always have promise, you never lose that promise.”