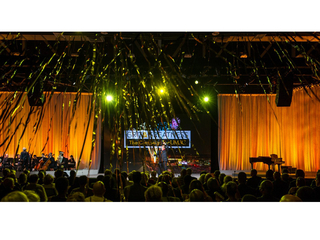 UMBC launched a new $150 million campaign on June 9, on the heels of a joyful 50th anniversary year, by coming together in harmony, quite literally. With individually toned bells in hand and the UMBC Symphony Orchestra playing along on stage, visiting maestro Boris Brott led community members in a rousing impromptu performance of Beethoven’s “Ode to Joy.”

“You’ve gotten the hang of it quickly,” Brott told the crowd. “Must be all that grit and determination that UMBC is so famous for.”

The moment capped an evening celebrating how the UMBC community works together to achieve great things. The Grit & Greatness Campaign—which focuses on ways of making big breakthroughs, forging true partnerships, and transforming lives—will raise funds to support everything from endowed professorships and teaching assistantships, to merit and need-based scholarships, to maker spaces and other innovative learning opportunities for students.

While a major focus of the campaign will be encouraging support from the entire community, guests enjoyed a video tribute to leadership donors whose contributions over time have created some of UMBC’s most unique learning models, including the Meyerhoff Scholars Program, the Linehan Artist Scholars Program, and the Sherman STEM Teacher Scholars Program.

“They saw—before most others—what was possible at a place like UMBC,” said Simon Stacey, interim vice provost and dean of undergraduate education, of the featured donors. “I think you’ll agree that these individuals embody UMBC’s character and show us what we all stand to gain by investing in our future.”

President Freeman Hrabowski called UMBC “a 50-year-long American experiment”—one that tested the idea that people from all backgrounds deserve an education. Today, he said, UMBC stands as a leader in inclusive excellence.

Sondheim Public Affairs Scholar alumna Alicia Wilson ’04, political science, shared an example of this through her own story of how a visit to UMBC unlocked a future she didn’t realize was possible while growing up in East Baltimore.

College “was not a given,” said Wilson, who was only able to take the SATs because a donor paid her test fee. When she visited UMBC—and met Hrabowski—she knew where she needed to be. After earning her UMBC degree, she completed law school and joined Gordon Feinblatt’s labor and employment practice. Today, she serves as vice president of Sagamore Development, where she gives back to the community through the Lakeland STEAM Center project, a UMBC partnership.

“There’s no better investment than education. You’re guaranteed magnitudes of return,” she said. “No other investment yields returns so quickly for our economy.”

To date, UMBC has raised $92 million towards its campaign goals. UMBC’s most recent campaign—Exceptional by Example, which ran from 2002 to 2011—exceeded its goal of $100 million by $15 million, and included more than 22,000 donors.

Hrabowski appealed to the crowd of supporters with a call to help UMBC continue to grow as an essential education, research, and community-serving powerhouse at an important moment in our nation’s history.

“America needs its universities now more than ever. We live in a time of huge challenges and breathtaking discoveries. We live in a nation that is divided. We live in a time when too many young people are shut out of life-changing opportunities,” he said. “The UMBC community does not shy away from hard work. We show up. We show our grit. I’ve never been more excited about this University and what we can do.”