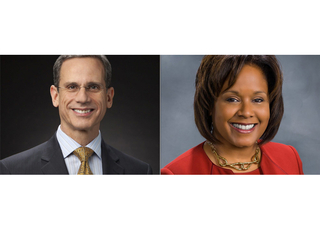 UMBC will welcome two alumni—known today as global leaders in their fields—as commencement speakers at this spring’s undergraduate and graduate commencement ceremonies.

On Wednesday, May 24, Dr. Ralph D. Semmel, ‘92, computer science, will speak at the graduate commencement ceremony. Semmel is the director of the Johns Hopkins University Applied Physics Laboratory (APL), which conducts research and development for the U.S. Department of Defense, NASA, and the intelligence community. He oversees the scientific and technological contributions of APL staff on national and global levels.

“We are absolutely delighted to have Dr. Semmel back on campus to share his story with our graduates,” says Karl V. Steiner, vice president for research.

UMBC physics professors Jim Franson and Todd Pittman both launched their careers at APL, and UMBC and APL have continued to develop meaningful connections throughout the years. “A growing number of our former students now have exciting and impactful careers at APL,” Steiner notes. “The close proximity of our two institutions makes us perfect partners for future collaborations.”

Before his current role, Semmel founded APL’s Applied Information Sciences Department and Infocentric Operations Business Area and served in numerous other research and leadership roles at APL, Wang Laboratories, the MITRE Corporation and the U.S. Army. He has also served on a number of boards, panels, and committees at federal science and technology organizations.

Stephanie C. Hill ‘86, computer science and economics, will speak to the Class of 2017 at UMBC’s undergraduate commencement ceremony on Thursday, May 25. She is the vice president and general manager of Lockheed Martin’s Cyber, Ships and Advanced Technologies (CSAT) line for Rotary and Missions Systems.

After graduating from UMBC, Hill became a software engineer at Lockheed Martin. Since then, she has held a wide range of senior leadership positions at the company in information systems, civil business, electronic systems, and sensors business.

“Stephanie Hill is such a great choice for undergraduate commencement speaker. As a female African American computer scientist who has had an incredibly successful career in technology leadership, she embodies UMBC’s commitments to diversity, civic engagement, social responsibility, and lifelong learning,” says Marie desJardins, associate dean in the College of Engineering and Information Technology and professor of computer science.

“She is also an outspoken proponent of STEM education and outreach, and is an inspiring role model for all of our students,” says desJardins.

Several organizations and publications have recognized Hill for her impressive career path and her work to advance STEM education. In 2014, she was included on EBONY Magazine’s Power 100 list, which recognized President Hrabowski in 2016. Locally, Hill was presented with the Greater Baltimore Committee’s President’s Award for supporting the development of minority-owned businesses.

Hill currently serves on the S&P Global Board of Directors and is the chair of the Greater Baltimore Committee. Driven by her passion for STEM education, she is also involved with Project Lead the Way, a national organization that provides STEM teacher training for K-12 educators.

Community members who aren’t able to attend the ceremonies in person can view them live through the commencement webcast, or follow them on Twitter @UMBC and through #UMBCgrad. Videos of the remarks will also be available online after the ceremonies.
Tags: alumni coeit csee economics