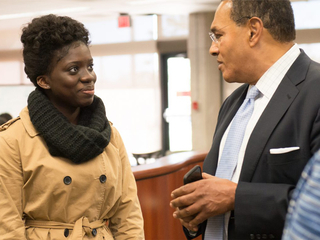 In a new article for Issues in Science and Technology, President Freeman Hrabowski and Peter Henderson, senior advisor to the president, describe the concerning continued underrepresentation of minorities in the STEM workforce, and what UMBC has done to tackle this problem head-on.

“If the nation’s policymakers and education leaders take the deliberate steps needed to expand the participation and success of underrepresented minorities in STEM based on what we know works,” they write, “success is possible.” But there’s a long way to go.

A 2011 report published by the National Academies, Expanding Underrepresented Minority Participation: America’s Science and Technology Talent at the Crossroads, noted that only 9.1 percent of the U.S. STEM workforce identified as African American, Hispanic, or Native American, compared to 28.5 percent of the nation’s overall population. Also, only about 20 percent of black, Latino, and Native American students who started in STEM majors graduated with a degree in a STEM field within five years. White and Asian American students did not fare well either, but their degree attainment rates were notably higher (33 and 42 percent, respectively).

“This is not a problem for minorities only; it’s a national problem,” write Hrabowski and Henderson. “To solve the problem, we in academia just need to look in the mirror.”

Since the 2011 report, there has been little overall movement in the national statistics. Some institutions, however, have made significant progress in supporting students from underrepresented groups to achieve success in advanced degree programs and careers in STEM. Hrabowski and Henderson cite several deliberate steps UMBC has taken to more effectively support underrepresented minority students in STEM.

At the highest levels, UMBC has rejected the concept of “weed-out” courses, which assume it is inevitable that only a small portion of students can succeed in STEM. Instead, the university has held firm that the institution is responsible for supporting student success across the board.

Faculty have redesigned introductory and other courses accordingly, and the article highlights UMBC’s Anne Spence in mechanical engineering, Taryn Bayles in chemical engineering, and Jeff Leips in biological sciences for their work with pedagogical techniques like the “flipped classroom” approach and team-based learning. The authors also spotlight Dean Bill LaCourse, of the College of Natural and Mathematical Sciences, who spearheaded the creation of the Chemistry Discovery Center, an interactive learning space for introductory chemistry courses.

Federal agencies have also joined the effort to increase minority participation in STEM. UMBC is involved in the NIH’s Building Infrastructure Leading to Diversity program, as well as NSF programs including the Louis Stokes Alliances for Minority Participation, Alliances for Graduate Education and the Professoriate, and Maximizing Access to Research Careers Undergraduate Student Training in Academic Research.

UMBC is perhaps best known for its Meyerhoff Scholars Program, founded in 1989 and now over 1,000 alumni strong, which provides students with financial, academic, and social support as well as professional development and intensive mentorship. Graduates of the Meyerhoff program are five times more likely to earn doctoral degrees than students who were admitted to the program but chose to attend another university, and the Meyerhoff program’s success has led to an $8 million investment from the Howard Hughes Medical Institute to adapt the program at Pennsylvania State University and University of North Carolina at Chapel Hill.

“The strategy is to deliberately form a sense of belonging and community that nurtures the students,” write Hrabowski and Henderson.

As a result of all these efforts, UMBC has climbed the list of institutions that best support minority students in STEM. Today, UMBC graduates the most black students who go on to complete M.D.-Ph.D. degrees in the nation, and only follows MIT for the percentage of black undergraduate degree recipients who go on to earn Ph.D.s in STEM. UMBC is also the sixth top university in graduating black undergraduates who then earn doctoral degrees in any field, with the top five all being Historically Black College and Universities.

“We must identify and learn from institutions that have been successful in educating African American undergraduates in the natural sciences and engineering through a focused effort,” write Hrabowski and Henderson. Additionally, they note, “We have learned that a campus that helps underrepresented minority students is also one that helps students in general.”

Now, “the nation must decide whether or not it will take the path leading to a science and technology talent pool…that draws from people throughout our population,” Henderson and Hrabowski suggest. “It is only by tapping all of that talent pool that the country will succeed in realizing the economic, security, and health goals the American people prize.”

Read the full article, “Toward a more diverse research community: Models of success.”